Aernout Mik
A Sense of Uncertainty

There is something going on, something disturbing, and we don’t know what it is. Meet the Dutch video artist Aernout Mik, who often works without sound: “I think the image is sharper, much sharper, without it.” Read more …

In this interview Aernout Mik reflects about three of his major works from the last decade – Middlemen (2001), Raw Footage (2006) and Speaking in tongues (2013). In all of them Mik describes the present as a time of uncertainty and recurrent crisis. His videos are like “vehicles which set things in motion” he says. Using art Mik tries to create conditions whereby we begin to realise our position between malfunctioning systems, for example drawing parallels between religious movements and our believe in the market economy. By showing us the relation between normality and extremity in our society, flaws and energy, Mik is hoping to push things forward onto the next step, even without knowing what that next step is, he explains.

Aernout Mik (b.1962) studied at the Academie Minerva in Groningen from 1983 to 1988, and participated in the Ateliers ’63 alternative art school in Haarlem. Miks working method has had a major influence on the present generation of video artists in the Netherlands. Mik creates several layers of reality, in which he combines staged action – both live and on video – with sculptural forms embedded in an architectural structure, thus creating a physical link between the viewer and the work.

Aernout Mik was interviewed by Marc-Christoph Wagner at Mik’s studio in Amsterdam, 2014. 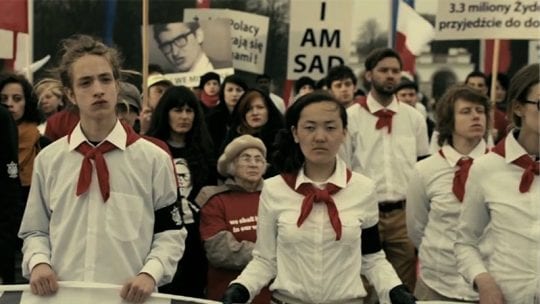