‘A moment of poetry’ Ai Weiwei calls this interview made through Skype by Olafur Eliasson. ‘I cannot talk on the internet or talk to foreigners and that is why doing it in this way is so important’, Ai Weiwei says. Read more …

Ai Weiwei (b 1957) was not allowed by the Chinese authorities to attend his exhibition at the Louisiana Museum of Modern Art in November 2011. Danish artist Olafur Eliasson interviewed Ai Weiwei at the opening through Skype asking him questions about his conception of a public space, poetry and how he would like resourceful people to use their voice. Eliasson also addresses the fact that Ai Weiwei might experience difficulties because of his taking part in this interview. ‘There will always be difficulties, that’s why answering of the questions become more meaningful’, Ai Weiwei says. He also quotes his father, who was a famous poet, saying that a human being’s desire for liberty and freedom is stronger than the wind and the air and nothing can stop them.

Ai Weiwei was interviewed by Olafur Eliasson in November 2011. 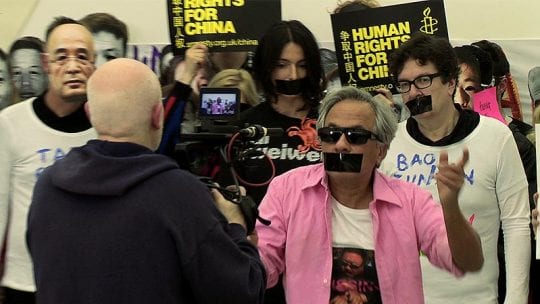