“I work in a ‘do tank’ not in a ‘think tank’.” In this personal video interview, the Chilean Pritzker Prize-winning architect Alejandro Aravena shares his unorthodox path to architecture and offers us insight into the important working process of his socially conscious – and highly innovative – architecture office, Elemental.

“Physically shaking a building, everything that was not strictly necessary falls. So why wait for the earthquake? Can’t we submit design to a mental force that has taken out everything that is not strictly necessary?… Hence the name of our practice, Elemental.” Because they primarily work in Chile, which is prone to natural disasters such as earthquakes, Elemental seek to understand and respond to the forces of nature in the same way that they respond to cultural or emotional forces. An aspect of this, Aravena feels, is the importance of bringing their work to its innermost core, when there’s no more to remove: “That moment of irreducible existence.” In continuation of this, Aravena, who is “trained in a context with a scarcity of means,” argues that the fewer resources they have, the more meaning every single thing that you were given has to have.

In architecture, process is key, Aravena stresses, and in order to succeed, one must try to understand what it is that really matters to a given society – try to understand the uniqueness of a question and resist the urge of thinking we know the answer in advance: “We spend time designing the question before jumping into the answer.” As a consequence, they never know in advance what a project will look like, an example of this being the headquarters of the Inter-American Development Bank Group in the middle of a poor neighbourhood in Buenos Aires. A building that became a bridge – also physically with a raised linear park – between the wealthiest and the poorest in society. This project, Aravena feels, combines in one single building, everything that they’ve learned: “Architecture has in its innermost core a very powerful tool, which is that the project is synthetic. It can by nature coordinate things that otherwise may be dispersed.” Because they are used to working with constraints and willing to risk their reputation as well as failure every time they do a project, they work hard in advance to anticipate any conflicts. The opinion which matters most to them is that of the user, and so they like to “think out loud with the user” and build projects “around those moments of consensus.”

Alejandro Aravena (b. 1967) is a Chilean architect. In 2001 he founded the socially conscious architectural office Elemental, which focuses on projects of public interest such as housing, public space, infrastructure and transportation, and they first gained recognition for their work with social housing projects in Chile. Elemental also designs other kinds of buildings from museums through universities to office buildings, not only in Chile but also in the U.S., Mexico, China and Switzerland. Exhibitions of their work have been included at e.g. the Sao Paulo Biennale 2007 and MoMA in New York City (2010). Aravena is the recipient of prestigious awards including the Silver Lion (2008), the Erich Schelling Architecture Medal (2006), a Global Award for Sustainable Architecture (2008) and the Pritzker Architecture Prize in 2016. From 2009 to 2015 he was a member of the Pritzker Architecture Prize Jury, and in 2016, he was the director and curator of the Architecture Section of the Venice Biennale.

Alejandro Aravena was interviewed by Marc-Christoph Wagner at the Louisiana Museum of Modern Art in Denmark in October 2018. 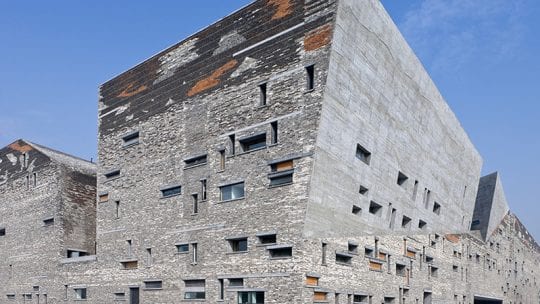 Architecture is a Job for God

Wang Shu
Architecture is a Job for God