Claes Oldenburg was known for his larger-than-life sculptures of familiar objects such as a clothespin, cigarettes, and French fries with ketchup. When Alex Da Corte first encountered the work of Oldenburg, it was the early 2000s. Their shared fascination with ketchup initially inspired and enchanted Da Corte, whose first sculpture and replica were of one of Oldenburg’s ketchup bottles. The sculpture of a familiar-looking bottle made of fabric is shown in Da Corte’s video “Carry That Weight” from 2003.

Before he met Claes Oldenburg’s work, Da Corte had not thought to make sculptures. He associated sculptures with woodshops that “didn’t feel like a safe space.” But that changed when Oldenburg’s sewn sculptures appeared in Da Corte’s life: “That’s a powerful way to make sculpture. It’s just that we don’t talk about it in regard to sculpture,” he says and continues: “When I saw that Oldenburg and his wife were sewing these works it appealed to me. That language appealed to me. And this idea that softness could be powerful.”

“Seeing Oldenburg tackle things as seemingly unmovable as Micky Mouse, for instance, appealed to me because, of course, I loved animation, and I loved cartoons. And he was kind of undoing and unraveling this familiar icon in ways that were not about love per se. They were unrelated to the mouse. It took the icon and then completely divorced the meaning and the message from this figure.”

Alex Da Corte (b. 1980) was raised in Venezuela and the United States and now lives and works in Philadelphia. He has mounted solo exhibitions at Secession, Vienna; the Institute of Contemporary Art, Philadelphia; Museum Boijmans van Beuningen, Rotterdam; Kölnischer Kunstverein, Cologne; and MASS MoCA, North Adams, Massachusetts, among many others. Group show and festival appearances include the Louisiana Museum of Modern Art, Humlebæk, Denmark; MoMA PS1, The Metropolitan Museum of Art, Whitney Museum of American Art and the Museum of Modern Art, New York; and the Venice and Lyon Biennales. In 2022 Alex Da Corte will present a large-scale 20-year survey exhibition at the Louisiana Museum of Modern Art. For more, see alexdacorte.com/

Alex Da Corte was interviewed by Kasper Bech Dyg at the Louisiana Museum of Modern Art in Denmark in September 2021. 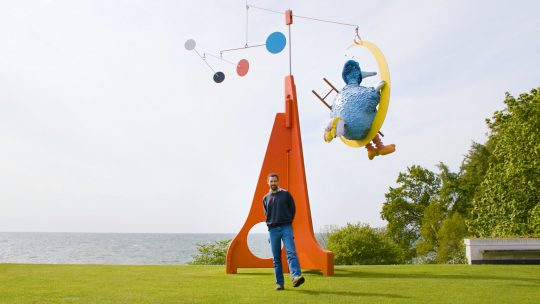