Indian writer Arundhati Roy won the Booker Prize for her 1997-novel ‘The God of Small Things’, which became the biggest-selling book by a non-expatriate Indian author. In this short video, she argues that being a writer means daring to speak up and describe the world as you see it: “It’s our job to be unpopular, it’s our job to stand alone and say what we really think, not as activists but as writers.” Read more …

In spite of the predominant need to classify people, Roy doesn’t feel that there is a distinction between being a writer and an activist, as this reduces what writers do. Most writers they write about the world they live in, without needing to be called “activists,” which Roy feels is a new word that has been added on because “the idea of what a writer is in the world today has been reduced into a commodity.”

Arundhati Roy (b. 1961) is an Indian writer and political activist. Her works of fiction include ‘The God of Small Things’ (1997) – for which she won the 1997 Man Booker Prize with the words “The book keeps all the promises that it makes.” – and ‘The Ministry of Utmost Happiness’ (2017). Roy is also the author of screenplays, most noticeably ‘In Which Annie Gives it to Those Ones’ (1989), which was awarded the National Film Award for Best Screenplay. In 2015 she returned the award in protest against religious intolerance and the growing violence by right-wing groups in India. Roy has also written works of non-fiction such as ‘The Algebra of Infinite Justice’ (2002) and ‘Listening to Grasshoppers: Field Notes on Democracy’ (2010). Among other prestigious awards, she is the recipient of the Lannan Foundation’s Cultural Freedom Award (2002), the Sydney Peace Prize (2004) and the Norman Mailer Prize for Distinguished Writing (2011). In 2003 she was awarded special recognition as a Woman of Peace at the Global Exchange Human Rights Awards in San Francisco. Moreover, Roy was featured in the 2014 list of Time 100, the 100 most influential people in the world. She lives in Delhi, India.

Arundhati Roy was interviewed by Christian Lund in May 2018 at the Louisiana Museum of Modern Art in Denmark. 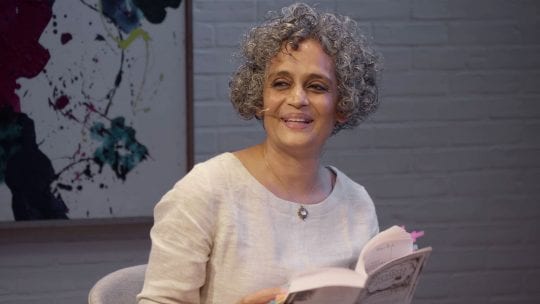 “For me, as a writer, the ambition is a simple one: You have to be able to write about everything.”

Arundhati Roy
The Characters Visited Me

Salman Rushdie
A Chance of Lasting