Asmund Havsteen-Mikkelsen
This Sense of Unease

"There are violent structures, which are imposing their logic to us.”

“I try to find architectural settings that become metaphors of those conflicts that I’m dealing with.” Join us for a studio visit with the praised Danish artist Asmund Havsteen-Mikkelsen, whose unease with the contemporary world is expressed through his abstract paintings of modern architectural icons. Read more …

“Architecture is built for eternity – it’s so monumental, it’s so powerful and so strong. It has this physicality to it, which makes it very difficult for an individual to change,” Havsteen-Mikkelsen says, adding that this is also why it works as a motive for him: “The scale of architecture is so much bigger than being a human.” Growing up in the countryside, but spending his adult life in big cities, Havsteen-Mikkelsen is very much aware of how the sense of estrangement towards the big city is expressed in architecture: “What I want to convey is this feeling of abstraction of modern society. The difficulties we have as individuals to access this abstract society. How it becomes its own system, which we somehow have to play but without really controlling it.” In continuation of this, Havsteen-Mikkelsen works with the uncanny as an aesthetic category and finds that it reflects his sense of the modern world as a scary and desolate place: “The sense of a huge, overwhelming structure that I somehow cannot change. And that’s maybe what I want to communicate to the viewer – this sense of unease with what we have created. That there are violent structures, which are imposing their logic to us.”

Asmund Havsteen-Mikkelsen (b. 1977) is a Danish artist. Asmund-Mikkelsen, whose paintings have a characteristic and unusual cropping, uses architecture as a subject and as a story frame for our lives. Solo exhibitions include galleries in Denmark, Berlin, London and Prague, and he is represented in numerous private and public collections including the Danish Arts Foundation and the New Carlsberg Foundation. For more see: https://www.asmundhavsteen.net/

Asmund Havsteen-Mikkelsen was interviewed by Laura Molloy at his studio in Copenhagen, Denmark in December 2019. 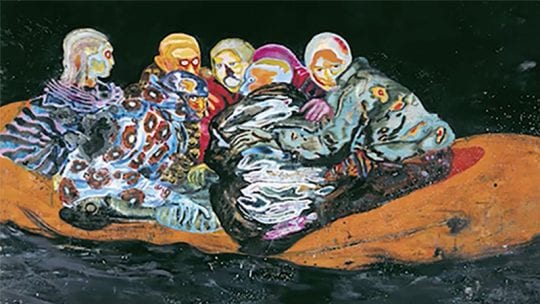