“I think there has never been a better time for Black writers or writers of color to get published.”

Bernardine Evaristo comes from a background in theatre, which is also where she first started to write. However, what she wrote had a strong, poetic quality: “For a long time, I didn’t understand why my natural voice as a writer was poetry.” Growing up in the Catholic Church meant being familiarized with and influenced by the Bible from a very young age. “Anybody who knows anything about the Catholic church or even who has read the Bible knows it’s incredibly poetic. So, I absorbed that. Poetry was absorbed into me through osmoses from my very early life.” It was also books of poetry that were the first Evaristo got published. It took her many years to develop from poetry to novels. The first attempt was “terrible writing,” according to Evaristo herself. She eventually found her way by mixing different literary forms, verse novels and prose novels.

“My process to capture the voices in my characters and my poetic style and prose style changes from book to book. Because I began as a poet, I really pay attention to how language sounds,” Bernardine Evaristo explains and continues: “It’s about capturing the voice of an individual character which I have to hear in my head. But sometimes the character emerges through the act of writing.” Writing comes naturally to her. Evaristo prints out and redrafts all the time: “I’m not the kind of writer who begins at the beginning of the novel and finishes it and then redrafts the whole thing. I redraft every sentence, every word, and every paragraph. Each time I am tweaking it.” When it comes to the subject of the feared writer’s block, Evaristo does not “believe in the concept,” she says and elaborates: “I think to name something as writer’s block is kind of misleading. Because there is something going on behind that, if you’re not able to write what’s going on, is it a lack of confidence? Is it that if you’re writing a novel, maybe you are new to novel writing, and it’s not structured in such a way that the architecture is not holding up the story? Should you be working on something else?”

In 2019 Bernadine Evaristo published the book ‘Girl, Woman, Other’ which would later be awarded the Booker Prize. “I knew I wanted to expand the representation of Black women in fiction.” While writing the book, Evaristo witnessed a changing world around her. Suddenly the world was focused on the MeToo, and the Black Lives Matter movement, which ended up making the book more topical than intended. “The whole reason to write the book was just to create a novel that is peopled by Black women because there aren’t many of us writing these books, and so we are not really very present in the British literature.” The book resonated with the zeitgeist and became an instant bestseller. “Suddenly, I was taken extremely seriously. I was given this kind of gravitas which had not been the case before. And as a writer who’s also an activist, who speaks up and speaks out, people were listening to me,” she says and points out that for a long time, the publishing industry would claim that there was no market for books by Black British writers. “The landscape today is very different. I think there has never been a better time for Black writers to get published or writers of color,” Evaristo explains and continues: “As a writer, I never gave up.”

Bernardine Evaristo (b. 1963) is a British writer, critic, poet, and playwriter. She has written ten books and numerous texts that span many genres. Her writing and projects are based on her interest in the African diaspora. Her novel ‘Girl, Woman, Other’ won the Booker Prize in 2019. She was the first Black woman and Black British person to win it in its fifty-year history. Evaristo has won other prizes, including the British Book Award’s Fiction Book of the Year & Author of the Year and the Indie Book Award for Fiction. Her books have been translated into more than 40 languages.

Bernardine Evaristo was interviewed by Tonny Vorm during the Louisiana Literature festival at the Louisiana Museum of Modern Art in August 2022. 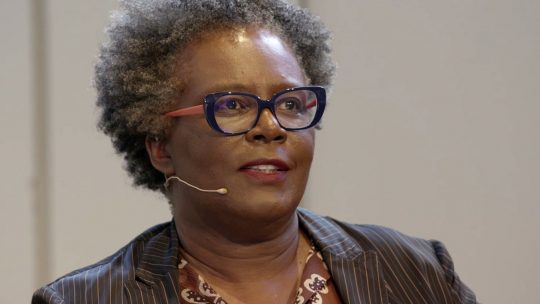