Did you know that in French one has to spit out a cat, in order to clear one’s throat? Poet Caroline Bergwall questions what languages do to the way we understand ourselves: “English speakers don’t so much struggle with cats as with frogs.” Read more …

“There are so many languages that I do not know, and therefore there are so many ways of communicating that I don’t know anything about.” London based French-Norweigan writer Caroline Bergvall (b. 1962) is a cross-disciplinary artist known for her multilingual and performance-oriented practices. In this video she reads from her poem ‘Cropper’ (2008) at Godsbanen in Aarhus, Denmark. Using the many meanings and associations of the word ‘crop’, Bergvall combines English, French and Norwegian. In English ‘crop’ is about breaking, interrupting or growing, while in Scandinavia ‘crop’ means ‘body’. Thus ‘Cropper’ is questioning the meanings and borders of languages. “Violence exists in language and can by applied very easily to actual bodies,” Bergvall explains.

Bergvall’s books often combine visual, performative and textual elements, and in spite of having English as her third language, she uses it as her main language as a writer. “I place myself within the politics and histories of that language as someone who’s had to learn it.” Bergvall uses accent, dialects, puns and even misspellings as literary practices, which means that one must not only read her texts, but listen closely to her readings.

Listening to ‘Cropper’ is an experience of moving in and out of languages – some of which the listener might not know. “That interest for different languages, for knowing and not knowing languages and the kind of communication that cuts across languages and cultures has helped me develop a number of ways of writing,” Bergvall explains. “It also made me a writer.”

The video starts and ends with Bergvall reading from ‘Cat in the Throat’ (2009).

Caroline Bergvall was interviewed by Alexander Vesterlund at Godsbanen in Aarhus during an ‘Art Writing’ seminar held by Aarhus Litteraturcenter, March 2013. 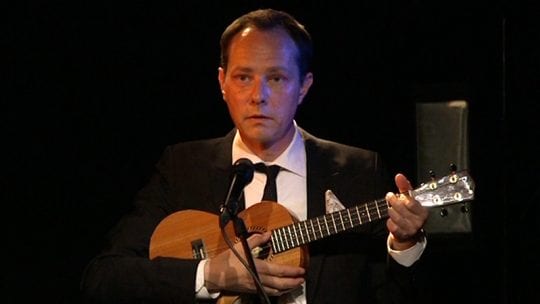