Carsten Höller
The Luxury of Doubt

“The ability to wonder is immanent in art.”

German artist Carsten Höller is widely praised for his experimental approach to art, with playful – often interactive – installations that include giant slides and enormous mushrooms turned upside down. Meet the renowned artist in this video, where he reflects on how art allows us to let go of control. Read more …

Höller talks about how an exhibition is often affected by the exhibition space: “The place has a kind of psychology … it’s often so that when you’re looking at a place, things unfold in their own way.” In connection to this, he suggests that one should sometimes leave things unfinished, as this can open up to new ways of seeing and unique experiences that would otherwise be inaccessible: “The ability to wonder is immanent in art.” Over time, Höller argues, we have – through, e.g. science – become experts at predicting the outcome of things, and have hence lost the feeling of being “totally exposed.” Therefore, one of the spiritual luxuries of our time, is that we can venture into a state of doubt, where “you don’t necessarily know what happens when you bring things together, but where perhaps the beauty in not knowing, or at least in the doubt, will again take its place so that you expose yourself to this beauty.”

Carsten Höller (b. 1961) is a German artist. Höller – who often employs a scientific approach to his art – is particularly known for his major interactive installations such as ‘Test Site’ (2006) – a series of giant slides installed in Tate Modern’s Turbine Hall. Höller has exhibited worldwide including at the 50th, 51st , 53rd and 56th Biennale di Venezia (2003, 2005, 2009 and 2015), Tate Modern in London, MASS MoCA in Massachusetts, Kunsthaus Bregenz in Austria, Palazzo Strozzi in Florence, 28th Bienal de São Paulo (2008), Guggenheim Museum in New York, Museum Boijmans Van Beuningen in Rotterdam, New Museum in New York and National Gallery of Victoria in Melbourne. He lives and works in Stockholm, Sweden and Biriwa, Ghana.

Carsten Höller was interviewed by Baldo Hauser in August 2019 at Höller’s studio in Stockholm, Sweden in connection with the exhibition ‘Carsten Höller – Behaviour’ at Kunsten Museum of Modern Art Aalborg in Denmark. 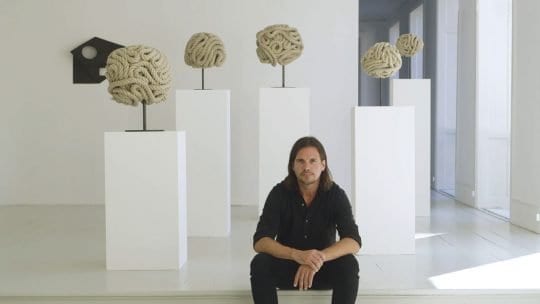 “My association with rope was this endlessness of a thought of a moment becoming unraveled.” 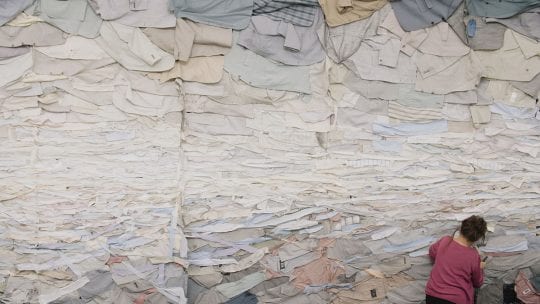 “If I’m honest with myself, this artwork can speak to other people as well.”

Kaarina Kaikkonen
A Father, a Mother and a Child