“I just don’t believe in the word ‘virtual’,” says artist Cécile B. Evans and argues that in today’s society, where drones are used for warfare and romantic relationships begin online we can no longer distinguish between the so-called real and the virtual. Read more …

As one of the most prominent voices of Post-Internet Art – a term covering art practices that engage with the Internet and new technologies – Cécile B. Evans’ work examines how digital culture has impacted the human condition. Over the past 10 years digital technologies have permeated our lives to such a degree that it is no longer possible to distinguish it from physical reality. “People worry that the real world will disappear,” says Evans, “and it’s not like the real world will evaporate and be usurped by the digital. In the best possible scenario it’s a collaboration between the two and it becomes a prosthesis for things we are unable to do, as opposed to a substitute.”

Cécile B. Evans (b. 1983) is a Belgian-American artist based in Berlin, originally trained as an actor at New York University. She is the recipient of the Emdash Award 2012 and the 2013 PYA Prize resulting in commissions for Palais de Tokyo in Paris and the Serpentine Galleries in London. Evan’s work has been shown internationally, e.g. at the 9th Berlin Biennale. For more about Cécile B. Evans see: http://cecilebevans.com

Cécile B. Evans was interviewed by Roxanne Bagheshirin Lærkesen at her studio in London in February 2016. 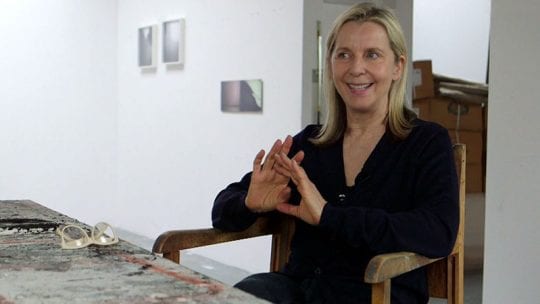 A K Dolven
Looking for Balance