Kraus begins by talking about two untitled photographs, which are rare colour-images among the around 120 prints from the artist’s estate that have been exhibited so far: “By this time, she’d photographed herself thousands of times. It wasn’t narcissism or curiosity or fascination, although maybe sometimes it was.” Woodman had tried using friends or family as models but felt they were playing dress-up: “The levels I try to get to are not about the having fun part,” Woodman had said. “It’s amazing how powerfully a nude body can activate any landscape. The first thing a photographer needs to figure out is how to make an image speak for itself. Woodman understood this at a very young age very well,” Kraus says. In Woodman’s time, she continues, “photography still hadn’t completely migrated into the realm of contemporary art. Photography had its own stars, its own exhibition hierarchies.” Consequently, Woodman struggled and tried to earn a living shooting fashion while pursuing her own work: “These two coloured photographs, timeless and yet indelibly time-stamped in downtown New York at the end of the 1970s, embody that proposition,” Kraus concludes.

Chris Kraus (b. 1955) is an American writer and filmmaker. She is widely known for her feminist novel ‘I Love Dick’ (1997), which the English newspaper The Guardian proclaimed, “the best novel written about men and women in the 20th century”. When ‘I Love Dick’ was reissued in 2006, it aroused great attention. In 2016 the novel was turned into a TV series by the same name. Among Kraus’ other books are the novels ‘Aliens & Anorexia’ (2000) and ‘Summer of Hate’ (2012) as well as the biography ‘After Kathy Acker’ (2017).

Francesca Woodman (b.1958-d.1981) is an American photographer particularly known for her black and white pictures featuring either herself or female models, naked or clothed, blurred (due to movement and long exposure times), merging with their surroundings or with faces obscured. Major solo exhibitions (posthumously) include SFMoMA in San Francisco, The Photographer’s Gallery in London, and Solomon R. Guggenheim Museum in New York City.

In the video, Chris Kraus reads a text about Francesca Woodman. The text is called ‘Proposition’ and the works in focus are an untitled series of photos from 1979-80. The text is written for the anthology ‘Looking Writing Reading Looking – Writers on Art from the Louisiana Collection’ (2019). More information here: https://www.artbook.com/9788793659216.html 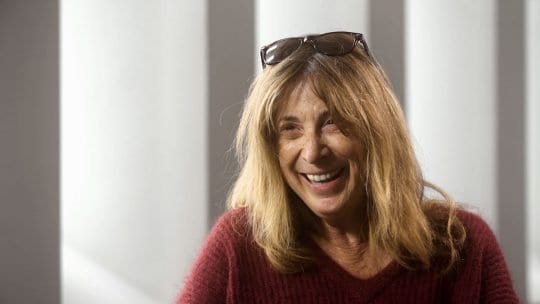 “‘I Love Dick’ happened in real life, but it’s not a memoir.”

Chris Kraus
On ‘I Love Dick’