“Maybe it’s because I had an unhappy childhood, but I was very conscious of family groups,” says Graham of his early photographs of people’s suburban houses. His mother, who worked as an educational psychologist, was very “cool and cold” and had a very intellectual approach, which Graham turned physical in his art: “My mother was in denial of the body, whereas my work became about body art and about the body.” Due to her work, his mother spent a lot of time with small children on the playgrounds, and though Graham disliked these playgrounds he has nonetheless been inspired by them: “I’m taking all of the kind of constrictive things in corporate architecture and playgrounds and making them into something playful and fun.” Growing up Jewish in suburban New Jersey, Graham was an alienated child, who furthermore had psychological problems: “I think I was borderline schizophrenic.” His parents dealt with his psychological troubles by taking him to a psychiatrist, who gave him anti-psychotic drugs at the age of 13. Graham responded by being “a very troubled child.” At around the same age, he got involved with astronomy. With the help of his father, who was a scientist, he built a telescope and consequently formed an astrology club, which proved to be the beginning of his interest in teaching: “Through teaching, somehow I was able to make a social situation for myself.”

“I’m turning alienation into pleasure for everybody including myself as a child, being alone with other children looking at the work.” When making his celebrated glass pavilions, Graham feels that he, like all men, has “voyeuristic tendencies” and is creating optical toys. He hopes that when people enter them, they will “be left on their own, this discovered pleasure on their own without my being an artist telling them exactly what they should see or think.” The shapes of the pavilions can be either intimate or intimidating, reflecting issues adolescence: “One fantasy that boys pursue, is to see themselves distorted, being like Superman, and also people superimposing their images onto each other is frightening, but in a certain sense it’s kind of the experience of being adolescent.” In continuation of this, he feels that the most important thing is the relationship between spectators on both sides of the two-way mirror glass, which he sees as a reaction against minimal arts, where work is the object: “It’s about intersubjective space.”

Dan Graham (b. 1942) is an award-winning American conceptual artist whose work spans across curating, writing, performance, installation, video, photography and architecture. He is perhaps most known for his pavilions, which he has designed since the late 1970s and which have been realized across the world. His work has been shown at Museum of Contemporary Art, Los Angeles, The Whitney Museum of American Art, New York, the Walker Art Center, Minneapolis, Musée d’art Moderne de la ville de Paris, Paris, Kiasma Museum, Helsinki and Louisiana Museum of Modern Art, Humlebæk, Denmark. Graham’s works have also been shown numerous times at prestigious events such as dOCUMENTA in Kassel, Germany and at the Venice Biennale, Italy.

Dan Graham was interviewed by Christian Lund in his home in SoHo, New York in October 2015. 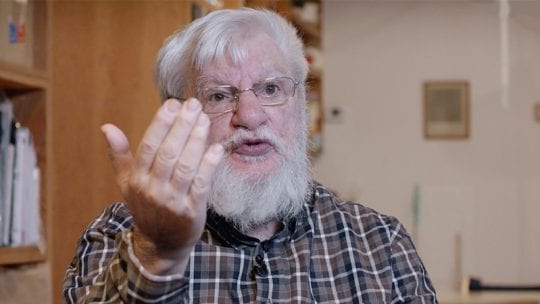