Watch Nobel Prize winning playwright Dario Fo (b.1926 – d.2016) tell his version of the story of King Christian VII of Denmark and his wife Caroline Mathilde – a dramatic story of love, infidelity and madness in the 18th century, which Fo explores in his new novel. Read more …

“When I start to research a character, I want to tell his story.” It was hard for Fo to tell the whole story, when it came to that of King Christian VII and his wife Caroline Mathilde, as many facts had been censored or removed from the historical writings. This, however, only triggered his interest further: “It makes me want to know the truth, what are you hiding and why?” On his quest to uncover the truth, Fo then found new texts abroad (in England and France), which made the novel ‘There’s a Mad King in Denmark’ (2015) come together.

Fo compares the tale of King Christian VII and Caroline Mathilde to that of Shakespeare’s ‘Romeo & Juliet’. In Fo’s version, a soon to be bride learns that her groom, the king, is in fact crazy – even though great measures have been taken to keep this a secret for her. Because of this knowledge, she sees him exactly for what he is and loves him in spite of his condition, and in spite of the fact that the main reason they’re supposed to unite is political. However, there’s an obstacle to their love: The queen mother doesn’t want the marriage to happen, as she wants her son – who is the same age as the king – to take his place.

“He studies and he befriends a German doctor, a genius. He knows everything, he teaches him and offers suggestions.” Moreover, it is also the story of how this unstable king – or perhaps more accurately his German physician Johann Friedrich Struensee (who came to have an affair with Caroline Mathilde) – did ground-breaking things for the Danish contemporary society.

Dario Fo (b.1926 – d.2016) is an Italian playwright, actor, comedian, director, stage and costume designer, songwriter, painter, writer and political campaigner. Much of Fo’s dramatic work depends on improvisation and draws on e.g. the ancient Italian style of commedia dell’arte. Fo’s plays, which have been performed all over the world, are known for their social criticism, and his solo piece ‘Mistero Buffo’ (1969) (Comical Mystery) is recognised as one of the most controversial and popular spectacles in post-war European theatre, and has furthermore been denounced by the Vatican. In 1997 Fo received the Nobel Prize in Literature, the Swedish Academy praising him with the words: “He if anyone merits the epithet of jester in the true meaning of that word. With a blend of laughter and gravity he opens our eyes to abuses and injustices in society and also the wider historical perspective in which they can be placed.”

Dario Fo was interviewed by Christian Lund at Hotel Bella Sky in Copenhagen on 10 November 2015. The book referred to in the interview is ‘C’è un re pazzo in Danimarca’ (‘There’s a Mad King in Denmark’) (2015). 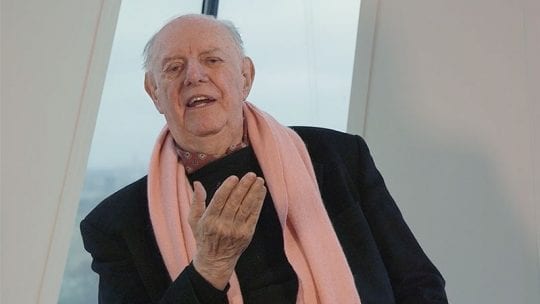 Dario Fo
We Need to Intervene

Umberto Eco
Advice to the Young