“Computers and technology push us in certain directions creatively and we have to know when to resist that.” Legendary musician David Byrne known from the band Talking Heads discusses working as an artist in the field of new technology. Read more …

“To be honest, I don’t think the quality of the recording is the most important thing,” says David Byrne and explains how he had moving experiences from listening to crappy radio when he was very young, and why he thinks good music should work in every format.

Recording and producing decent music is much easier today, because of the technology and software available. The technology “tends to encourage us to record in a certain way,” Byrne explains. Regular, repeatable, strict and steady tempos were an ideal in the past, but are maybe not the best thing. We have to know creatively when to resist technology: “Starting without the computer allows me a certain amount of freedom.”

Also, you cannot control how people choose to listen to your music – it may be on a phone with crappy speakers – so the music has to work “in whatever format.” When Byrne sees people listening to music holding up a phone it makes him wonder: “What kind of music works really well like that?”

The Scottish born, award winning musician, David Byrne (b.1952), who was a founding member and principal songwriter in the American New Wave band Talking Heads, has also released numerous solo recordings and worked across various media, including film, photography, opera, and non-fiction.

David Byrne was interviewed by Pernille Jensen at Falconer Salen in Copenhagen, Denmark in August 2013. 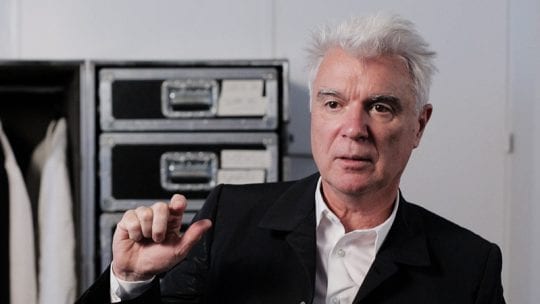 David Byrne
Advice to the Young