In this interview, 74-year-old artist David Hockney defends smoking and talks about how important the joy of life is to your health and your creativity. Read more …

British artist David Hockney is considered one of the most important contemporary artists. In this video he talks about how losing his hearing has made him see space clearer, about experiencing space in New York, about Claude Monet being a smoker all his life, about setting yourself major tasks at an advanced age and doing fine as a smoker, and how ‘joie de vivre’ keeps you vital.

David Hockney (b.1937) is a British painter, printmaker, photographer and stage designer, who is considered among the most influential and versatile British artists of the 20th century. Hockney is a notable contributor to the pop art movement in Britain, both in its foundation and growth, beginning with his participation in an annual exhibition called ‘Young Contemporaries’ in 1960, which also marked the start of his recognition in the art world. Hockney is the recipient of several prestigious awards including the Praemium Imperiale for Painting (1989), and the Lifetime of Artistic Excellence Award (Pratt Institute) in 2018. His work can be found in numerous collections worldwide, including National Gallery of  Australia in Canberra, National Portrait Gallery and Tate Gallery in London, Museum of Modern Art and Metropolitan Museum of Art in New York, Centre Pompidou in Paris, De Young Museum in San Francisco, Louisiana Museum of Modern Art in Humlebæk, and Museum of Contemporary Art in Tokyo.

David Hockney was interviewed by Christian Lund at the Louisiana Museum of Modern Art in Denmark in March 2011 in connection to the ’Me Draw On iPad’ exhibition. 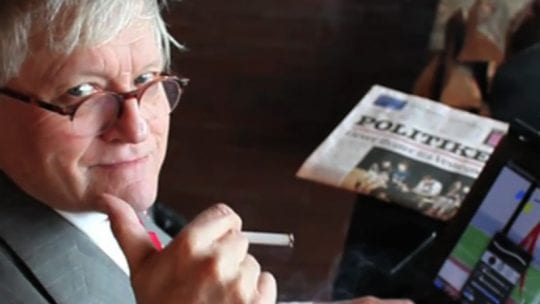 David Hockney
Draws on His iPad