“Writing is putting yourself at risk a little bit, unveiling yourself.” In this in-depth video, the French literary sensation Delphine de Vigan talks openly about why she waited before beginning to write novels, about the elusive idea of truth in fiction, and about the trace that childhood leaves. Read more …

All writers wonder why they write, and “writing is also a kind of quest around this question,” Vigan argues. Writing ‘Nothing Holds Back the Night’, trying to tell her mother’s story – and through her, part of her own story – she felt that she was “touching something really fundamental.” Her mother’s hospitalization in a psychiatric unit was a breaking point, which changed everything also in physical terms, and Vigan feels that “writing partly got rooted in this kind of intimate exile.” The great sensitivity to other people’s moods that she developed during childhood is what she thinks made her a writer. She began writing at the age of twelve in a diary, which she considers “intimate writing,” which wasn’t for others to read. Much later, when she had found her place in adulthood, she felt personally solid enough to “take the risk to write. To really write. Because in a way, when you write, I have the feeling that you open Pandora’s box, and there’s something quite explosive, quite dangerous in all that.” In continuation of this, Vigan also talks about how the trace of childhood stays with you: “Nearly all the adults that I know carry within them the child they have been.” In contrast to earlier, however, she no longer feels that one has to break free from that child, but rather tame or make do with it.

“The truth essentially does not exist. When I write, I’m already in the novel. I’m in a form of fiction.” Vigan is not interested in having her books labeled as e.g. ‘autofiction’: “I like the idea that many trends and many writing styles can coexist …” Many people, however, are very interested in which parts of a given novel are in fact true: “But the way I tell things isn’t THE truth. It’s MY truth. It’s my perspective as a child, on this story, on this day.” Writing, she feels, is highly subjective and memory is “a fiction factory” just as writing “is a fiction factory.” In response to this, her novel ‘Based on a True Story’ is a meeting between two conceptions of literature, trying to answer the question of “who am I when I write? Is it me? Is it someone else? Are there two identities confronting themselves?” Moreover, she feels that fiction is the best way to approach the human condition – the part of our existential experience that remains inexpressible.

Delphine de Vigan (b.1966) is a French novelist. Vigan’s breakthrough work was the novel ‘No and me’ (2010) (‘No et moi’, 2007), which was awarded France’s prestigious Prix de Libraires in 2008. The novel was translated into more than twenty languages and a film adaption was released in 2010. Her novel ‘Nothing holds back the night’ (2014) (‘Rien ne s’oppose á la nuit’, 2011) sold over a million copies and also won several literary prizes, including the Prix du roman Fnac and the Prix Renaudot des Lycéens. Among other books, Vigan is also the author of ‘Based on a True Story’ (2017) (‘D’après une histoire vraie’, 2015) and ‘Loyalties’ (‘Les Loyautés) (2018). She lives in Paris.

Delphine de Vigan was interviewed by Tore Leifer in connection with the Louisiana Literature festival in Denmark in August 2018. 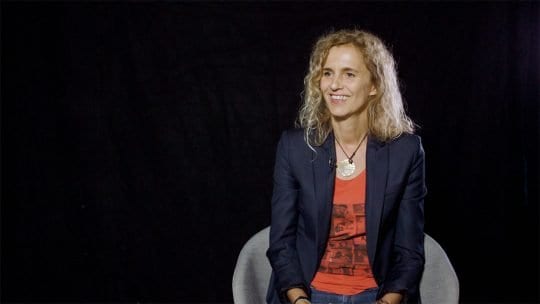 “The biggest threat for books today is probably the time we spend on our smartphones."

“The Moon is the king of the night.”

6 Writers
On the Moon