“I want to use art as a field where I can explore parallel scenarios.” Dora Budor makes complex sculptures and interactive installations inspired by cinematic metaverse and scientific research. Join us as we visit the young Croatian artist in her studio. Read more …

Budor is interested in the creation of narratives, and why it is significant for humans to tell stories through different levels of mediation. This interest led her to study the interrelated objects that are made for the eye of the camera. She often uses screen-used props, special effects castoffs, and set remnants that have been created for the screen, that she detours and re-appropriates, using the same type of labour that was engaged in creating them – thus making a full circle of production. An example of this is her work ‘Adaption of an Instrument’ (2016) in which she uses prop frogs from the film ‘Magnolia’ (1999) to create a new reactive environment. In her exhibition systems the viewer’s body quite often incites change or instability; in this case, the instrument continuously reacts to their presence, with the light that pulses up and down the walls according to the level of activity within, and in motions modelled after the neurological pathways in a human body. The presence of visitors brings the “instrument” to life, reanimating the image on its ceiling through a conduction of impulses, as though triggering a memory. Here, Budor also reflects on the fact that frogs were used since Roman times as an ‘indicator species’, from which one could diagnose the state of health of a society.

The legacy of architecture is also central to Budor’s artwork: In her piece ‘Ephemerol’ she has created a sculpture in which the interior is inspired by Danish designer Verner Panton’s immersive exhibition on a cruiser boat sponsored by a pharmaceutical company: “Verner Panton’s environment then became almost like a template for science fiction films of that era.”

Dora Budor (b. 1984) is a Croatian artist who explores intertwining narratives of cinematic ecosystems and architectural structures within reactive environments. These are concerns that are articulated mostly through installations, sculptures and environments. Budor often uses movie props, which she gives a second life through re-contextualization. They become part of a new system, infective ecology in “a film without a film”. In these epicentres, real and fictional narratives are collapsed onto the same temporal pane; they become part of an ecology of things in which biological and environmental changes, ideological structures and modalities of social control come together. Budor has exhibited at prominent venues such as Swiss Institute and Whitney Museum of Modern Art in New York City. She lives and works in New York City.

Dora Budor was interviewed by Roxanne Bagheshirin Lærkesen at her studio in Brooklyn, New York City in July 2017. 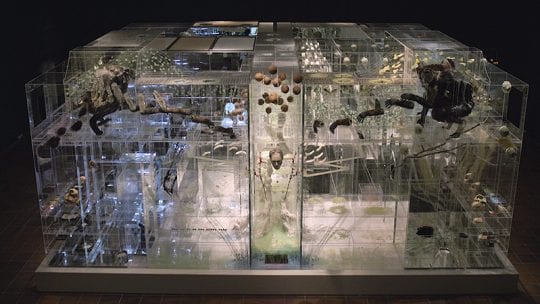