“I decided to describe her.”

The prizewinning Danish writer Dorthe Nors here talks about why her preferred fictional characters – single, childless women in their 40s – are so under-explored in literature: “The female misfit is a threat to things as they are.” Read more …

“Writing means that I’m in the world in a special way. I can’t separate writing from breathing or from talking to people or from sleeping at night or taking the bus and being in the world.” Nors didn’t debut as a writer until the age of 31, because writing comprised so much of her identity: “If your book isn’t accepted, you’re not good at what you are. It would cause an existential crisis. So it took a long time before I dared to test my talent.” Abroad, Nor is mostly known for her short stories, which she considers a difficult genre, where you must make an immediate impact: “You don’t have a half or a whole page to set the scene.”

Nors likes to portray people, who are on the threshold of losing themselves, and at one point she became interested in writing about women who, like herself, were single with no children. This particular character, she feels, isn’t often encountered in literature, whereas male loners have been described countless times, simply because men have had centuries to write while women have not: “It’s a question of having a voice in the world.” In continuation of this, she feels that these women have been edited out because of the tendency to consider them failures or misfits: “They were disasters in relation to their gender and they weren’t spoken of… They were free to see society from the outside. They were free to move and not to give in to reactionary structures. Therefore they were made invisible.”

Dorthe Nors (b. 1970) is a Danish writer. She is the author of several novels including ‘Soul’ (2001), ‘Stormesteren’ (2003), ‘Ann Lie’ (2005) and ‘Mirror, Shoulder, Signal’ (2016), which was a Man Booker International finalist in 2017. Nors has also written the collection of short stories ‘Karate Chop’ (Kantslag) (2014/2008). One of the stories from ‘Karate Chop’ appeared in The New Yorker in 2013 – making her the first Dane ever to have short fiction in the magazine – followed by another story in 2015. This collection of short stories consequently marked the beginning of an international career, receiving praise from e.g. The New York Times, Oprah Winfrey and The Chicago Tribune. Nors is also the author of ‘Kort over Canada’ (2018), as well as the novellas ‘Minna needs rehearsal space’ (Minna mangler et øvelokale) (2013) and ‘Days’ (2013). In 2014 she received the Per Olov Enquist Literary Prize. For more see: https://www.dorthenors.dk/english

“It turns into a space that others want to fill perhaps by speaking even more.” 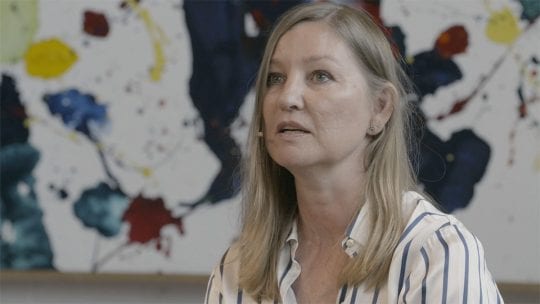