“Writing is an opportunity to be many things.” Talking about identity and gender, Myles shares the desire to be a boy as a child, and the sense of fraud they experienced as a young woman, “posing” as a female. The experience of going to Catholic School, where you were “endlessly stripped of a self,” and the early loss of an alcoholic father, Myles feels, has entered their writing in the shape of melancholy, becoming “this residue from, in some ways, undigested sadness.” Writing, Myles argues, is in fact “massive mourning.” What writing can also do, Myles continues, is put you back together if you’re broken: “You’re making this kind of collage of beauty or success or making failure beautiful. You reconstruct your wholeness. And then the cracks mean it’s real.”

Linn Ullmann (b. 1966) is a Norwegian author, journalist and literary critic. Her debut novel was ’Before You Sleep’ in 1998 and she has since published several critically acclaimed international bestsellers including ‘Grace’ (2002/2006), and ‘Unquiet’ (2018) (De Urolige, 2016). Ullmann is the recipient of the prestigious Gold Pen award and the Norwegian Reader’s Prize, among others.

Eileen Myles was interviewed by Linn Ullmann onstage at the Louisiana Literature festival in Humlebæk, Denmark in August 2017. In the video, Myles reads from the novel ‘Chelsea Girls’. 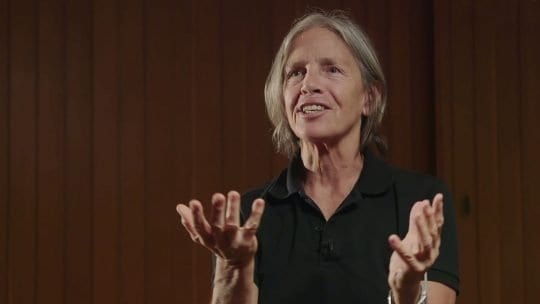 “I would just write great poems in that state.”

Linn Ullmann
We All Try to Make Life Work