“You have to talk about what’s happening outside the window,” says the award-winning British-Turkish novelist Elif Shafak in this video, where she speaks forcefully about the importance of sisterhood and global solidarity, and about the novel as an increasingly needed democratic space. Read more …

Shafak was raised by two women – her mother and grandmother – which she feels gave her an early sense of being different: “Throughout my life I felt like an insider-outsider, always on the periphery, somewhere on that threshold.” This, she adds, is a good place for the art, but a very lonely place for the artist. Growing up with these two very different women, she feels, has also made her a great believer in sisterhood – the solidarity between women: “Individually, we can have our own little successes, our own little strengths. That doesn’t mean anything if we don’t support each other, if we don’t empower each other as women.” This solidarity, she continues, doesn’t only apply to women but to all made to feel like outcasts: “We need to change these power relations. So, I’m someone who wholeheartedly believes in global solidarity. And I think we’re living in a crucial time for that.” In connection to this, Shafak feels that the underlying current in her novels is “a desire to give more voice to people who have been voiceless, to bring the periphery to the centre, to make the invisible a little bit more visible, to change those power hierarchies – topple it upside down.” Hence, minorities in all forms play an essential role in her novels as does the ability to talk about taboos: “Of course storytellers are interested in stories, and we love stories, but I think we should equally be interested in silences – the things we cannot talk about easily.”

“There’s humanism at the core of literature.” When her novel ‘The Bastard of Istanbul’ came out in 2006, Shafak was put on trial “for insulting Turkishness, even though really nobody one knows what that means.” Shafak – and her fictional characters – were eventually acquitted, but she had to have a bodyguard for more than a year afterwards. Unfortunately, she feels, things have not improved since then in Turkey, where a female novelist is primarily considered a female, and depicting, e.g. sexuality is deemed a result of the female writer’s experiences rather than her imagination: “You will be personally accused of being immodest.” In the face of this kind of censorship, this kind of attack against culture and storytelling, Shafak argues that “as writers, we can only keep writing.” If you are an author from what Shafak describes as “a wounded democracy,” you do not have the luxury of being non-political: “At the end of the day, art is about resistance. It is always a struggle. You always try to swim against the tide. You try to re-humanize people who are being de-humanized by mainstream narratives over and over.” Shafak argues that we’re living in a time where stories and storytelling is even more important to connect us and to increase our emotional intelligence. The moment we become indifferent is what is most dangerous, and literature “can poke holes in that world of numbness that’s been erected around us.” Finally, Shafak also comments on how many countries – including Turkey – have gone backwards in regards to democracy, and that we all need to step up, speak up and protect liberal democratic values, fighting inequality.

Elif Shafak (b.1971) is a Turkish-British novelist and the most widely read female author in Turkey. Among her many novels are ‘The Bastard of Istanbul’ (2006), ‘The Forty Rules of Love’ (2009), ‘Three Daughters of Eve’ (2016) and ’10 Minutes 38 Seconds in This Strange World’ (2019). Shafak is the recipient of several prestigious awards. In 2010 she was awarded the title of Chevalier dans L’Ordre des Arts et Lettres, and in 2017 she was chosen by Politico as one of the twelve people who would make the world better. She lives in London. For more see: https://www.elifsafak.com.tr/home

Elif Shafak was interviewed by Simi Jan in connection with the Louisiana Literature festival at the Louisiana Museum of Modern Art, Denmark in August 2019. 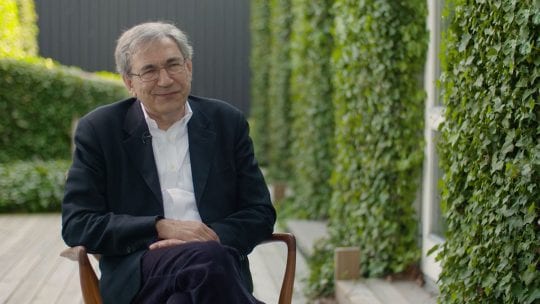 “I don't glamorize, sugarize, romanticize my relationship with the town.”

Orhan Pamuk
Do Not Hope for Continuity