Find out how one of Finland’s most prominent artists, Elina Brotherus, tries to break down the barrier between the spectator and the photographic work, and how she claims the position of power that female artists are entitled to: “Women artists need positive role models, we need other women artists that we can look up to and compare ourselves to.” Read more …

“I like demystifying and deconstructing the image. That’s why I like to show the process of making it.” Brotherus wants to make the way she works visible “so that the spectator sees, okay, she is the model, but she is also the author. She is, sort of, above the situation. She decides. She’s in charge.” This part, she continues, is also essential because she considers herself a feminist “like every woman should be.” Female artists, Brotherus adds, are underrepresented in the art world, which is problematic: “Women are 60 per cent of art school students, but where do they disappear?” In continuation of this, Brotherus doesn’t consider the female figure in her work to be herself, but rather a representation of a topic that can be difficult to discuss. An example of this is her series of work – ‘Annonciation’ (2009-2013) – which addresses her involuntary childlessness. The work came about when she realised the importance of turning her struggle into images, supporting those in the same situation. Now, many years later, Brotherus has recognised all the possibilities she has, because her family consists of “two adults and a dog”: “Somehow I feel that the older I get, the more playful I get. So in a way, it’s no regrets.”

Elina Brotherus (b. 1972) is a Finnish artist who works with photography and video. Her works alternate between autobiographical and art-historical approaches – always with Brotherus herself as the model. Brotherus is the recipient of prestigious awards including the Carte blanche PMU (2017), the Finnish State Prize for Photography (2008) and the Prix Niépce (2005). Her work has been given prominence in numerous art and photography books and magazines and is held in public collections including the Centre Georges Pompidou in Paris, Kiasma Museum of Contemporary Art in Helsinki, Moderna Museet in Stockholm, Saatchi Collection in London, Louisiana Museum of Modern Art in Humlebæk and MAXXI in Rome. For more see: http://www.elinabrotherus.com/

Elina Brotherus was interviewed by Christian Lund in at the Louisiana Museum of Modern Art in Humlebæk, Denmark in June 2019 in connection with her exhibition ‘Elina Brotherus – Playful Wanderer’ at Sorø Kunstmuseum in Sorø, Denmark. 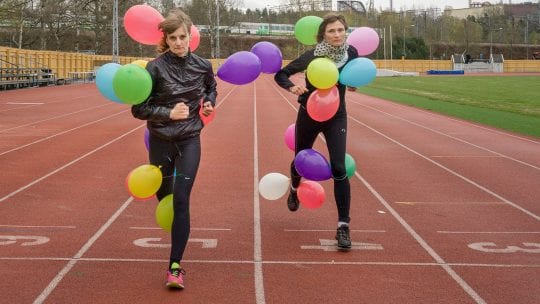 “Art is never made in a void.”

Elina Brotherus
Only in Art Can Adults Play