”The most intact world is the world of art. Nothing is better or more interesting to me than paintings.” Renowned German artist Georg Baselitz looks back on his life, his roots and inspirations, and considers where he is at today. Read more …

”Obsessiveness is a distinctiveness. You always face considerable resistance. You consciously have to take the path of an outsider. They try to humiliate you, tear you down. And that’s why it’s worthwhile continuing.” According to his own words, the great contemporary artist Georg Baselitz seems to be a man who is all about resistance, wanting to stand out, prove himself and to be in control.

In the beginning Baselitz got into art because he wanted to “get the girls” as he explains it, and was too lazy to succeed with music or poetry, he says. As an artist Baselitz went his own ways, and again found it most important, to stand out, and to do what had never been done before. Today his work is changing again. There is not going forward he says: ”You stand at the stern of a boat and look back. Looking back at what’s gone the ’passato’ is a more interesting viewpoint for me.

Georg Baselitz was born Hans-Georg Kern in 1938, in what was later to become East Germany. In the 1970s, Baselitz was part of a group of Neo-Expressionist artists (“Neue Wilden”) focusing on deformation. Baselitz became famous for his upside-down images and was seen as a revolutionary painter. From a European perspective, Baselitz’ style is seen as postmodern. Baselitz is currently a professor at the Hochschule der Künste art academy in Berlin. 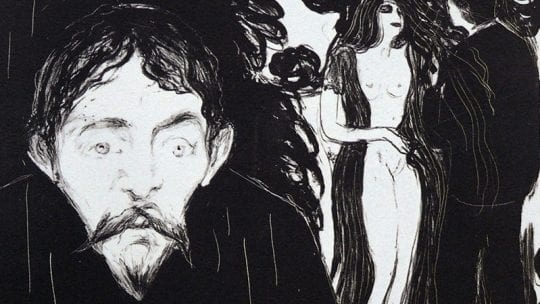