It was when he lived in hectic New York, that Dutch filmmaker, video artist and sports aficionado, Guido van der Werve, became acutely aware of his artistic need to seek out simplicity – and to be bored. Read more …

Concentration and time are intertwined for van der Werve, and he therefore tries to place himself in simple surroundings, where time is not important, spending half the year by the tranquil lakeside in Finland. Something that provides him with the luxury of a boredom that seems to generate new ideas.

Sport is an honest way of expressing oneself, according to van der Werve, who considers sports to be authentic performances: “You’re in a state, where you really can’t pretend anymore.” Doing sports, such as triathlons, helps him stay alert, and because he admits to being a control freak, he needs his sports even more, when he composes music for his movies, which he does singlehandedly: “Music is up in the air – it’s not tangible. It can be like a big mind-fuck.”

Van der Werve wishes to make art more accessible and straightforward, so that even a child can take something away from it: “The sublime lies in the simple – when you make something so simple that it becomes universal.” Again, he looks to sports in doing so: “The sign of a good sportsman is, that the easier it looks, the better they are at it.“

Guido van der Werve is a Dutch filmmaker and visual artist born in the Netherlands in 1977. He pursued studies in industrial design, archaeology, music composition and Russian language and literature at several universities in the Netherlands before beginning to create his first video documented performances around 2000. Since then he has created a variety of works, including films and videos, which are named after numbers (e.g. ‘Nummer twee’). Showings of his work include solo exhibitions at the Museum of Modern Art and the High Line, New York; the Guiliani Foundation, Rome and de Hallen Haarlem in the Netherlands. His film, ‘Home’, won the 2013 Golden Calf Award in Amsterdam for Best Short Film.

Guido van der Werve was interviewed by Marc-Christoph Wagner at his house in Finland. 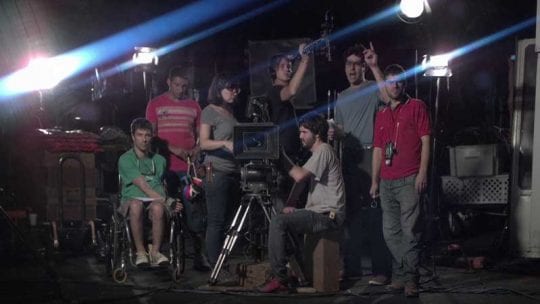