During the Cold War CIA and MI6 funded cultural fronts. To promote the open societies agents had to operate in deep secret, an absurdity that drove Ian McEwan to write the spy novel ’Sweet Tooth’, which he reads from here. Read more …

‘Sweet Tooth’ deals with the experiences of its protagonist, Serena Frome, during the early 1970s. After graduating from Cambridge she is recruited by MI5, and becomes involved in a covert program to combat communism by infiltrating the intellectual world. When she becomes romantically involved with her mark, complications ensue.

”In Britain in the 70s, women played a very lowly role in the intelligence services,” Ian McEwan says. ”Women weren’t allowed to be promoted beyond a certain point. It was held an assumption in the upper regions of MI5 that women couldn’t keep secrets. We had good reasons to think that, because all the people who had betrayed our country were men,” he adds ironically.

“The Cold War wasn’t only a matter of nuclear weapons, it was also a battle for hearts and minds,” McEwan continues. ”Serena is sent down to Brighton to offer a yearly grant to a young promising writer that MI5 think might suit their purposes. In fact, CIA and MI6 did fund many such cultural fronts during the whole of The Cold War. One of the strange paradoxes is that to promote the open societies you have to do this in deep secret, an absurdity, which actually drew me into this subject matter.”

Ian McEwan (b. 1948) is an award winning English novelist and screenwriter. McEwan has been shortlisted for the Man Booker Prize for Fiction numerous times, winning the award for the novel ‘Amsterdam’ in 1998. In 2001 he published ‘Atonement’, which apart from wining numerous awards, also was adapted into an Oscar-winning film. Among his other books are ‘Saturday’ (2005), ‘On Chesil Beach’ (2007), ‘Solar’ (2010) and ‘Sweet Tooth’ (2012). He was awarded the Jerusalem Prize in 2011. Read more about him here: http://www.ianmcewan.com/ 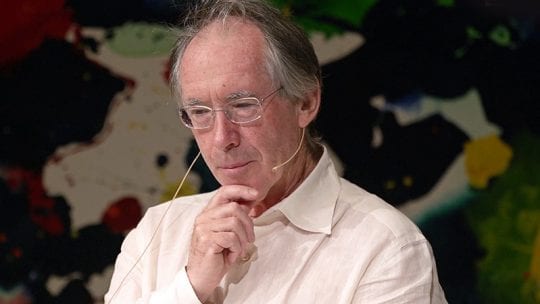 Ian McEwan
How We Read Each Other