Ibrahim Al-Koni
In the Desert We Visit Death

The desert means freedom. It is the only place where we can stare death in the face, and return home safely afterwards. Meet Libyan writer Ibrahim Al-Koni for a rare talk about the desert as a literary place. Read more …

Ibrahim Al-Koni, born 1948, is considered one of the greatest living Arab writers. To Al-Koni, the novel is first and foremost about relationships and about humanity, he explains in this interview. The desert is rich with emotion and spirituality, while the letter, or being literal, is deadly, he explains.

The desert is not really a place, Al-Koni says, it’s a transcendental, shadow of a place. Time in the desert is a mythical, secretive time, where past, present and future merge into an eternal moment. The desert holds everything, but in disguise, it is a place with absolute freedom, a lost dimension between life and death, existence and freedom.

Al-Koni then tells the tale of the two tribes that all people come from. One tribe is nomadic, and it’s only capital is freedom. The nomadic tribe has turned to contemplation and the search of truth. The other tribe is the settled people, whose capital is ownership, and all that ownership entails – crafts, industry, civilization. To the nomadic desert people a house and a grave is the same thing.

Al-Koni explains that to Saint Augustin the nomadic tribe was also the divine tribe, the tribe of doubt. Al-Koni compares the struggle between the tribes to the struggle between mind and body, and also compares it to the biblical story of Cain and Abel, where one brother is a farmer, and the other brother a traveling shepherd. The struggle between these two types of people is a missing link in the history of humanity, according to Al-Koni. The misunderstanding between the two tribes has led to many wars. The traveler is sacred in all religions, and seen almost as an angel. 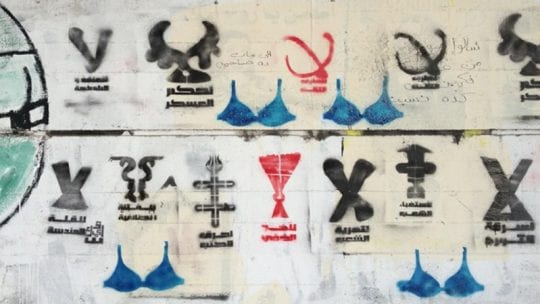 Bahia Shehab
Art as a Tool for Change