“All of us need beauty to evolve.”

“It’s all about the architecture we can do, and not about us being the architect.” Enjoy this cordial conversation between two long-time friends and titans of architecture – the Swiss Pritzker Prize-winning Jacques Herzog and the highly influential Mexican architect Tatiana Bilbao, who here discuss Bilbao’s projects and architectural approach. Read more …

The two prizewinning architects talk about the defining moments in their friendship, and Bilbao shares how Herzog advised her to “operate as a network,” which she has taken to heart. She feels that collaborations challenge and question her ideas, as well as opens her mind to other approaches, in a way that wouldn’t be possible otherwise: “It enriches the project because when there is more complexity and definitions in one site… then it really provides a more broadened possibility for the people that are going to use the architecture.”

“All of us need beauty to evolve.” Bilbao and Herzog also discuss Bilbao’s position against eclectic digital architecture, which she doesn’t feel tackles the architectural issues they should: “Especially in the context which I live in, doing these crazy architectural jumps – somersaults – is unnecessary because we really are in a context where there are basic necessities which haven’t been fulfilled.” The Mexican architect, who does social housing as well as private homes, explains that even though housing is a constitutional right in Mexico, they don’t live up to that “because a house should be beautiful, should be a place to inspire your life.” She feels architects can provide precisely that – they just have to spend some time figuring out how to do it at a low cost. Finally, both architects agree that architecture should be inspired by the desires of the people rather than those of the architect.

Tatiana Bilbao (b. 1972) is a Mexican architect. The landscape plays a crucial role in her work, and she works with it on various scales – from the Mexican countryside through urban scenes to the ‘internal landscape’ of the individual building. Her wide-ranging work includes structures along a pilgrimage route in Mexico, a botanical garden and a project in Mexico City, where a line of light will enable women to walk safely through remote parts of the city. In 2004, she founded Tatiana Bilbao Estudio with projects in China, Europe and Mexico. At the Chicago Architecture Biennial 2015, Bilbao presented a “flexible building prototype,” using modular components that could be adjusted to fit the number of inhabitants, and with materials that could be varied to suit the climate. The design was commissioned by the Mexican government to help alleviate the country’s housing shortage with low-cost solutions. Bilbao is the recipient of prestigious awards including the UNESCO Global Award for Sustainable Architecture Prize in 2014.

Jacques Herzog (b. 1950) is a Swiss architect. Herzog is co-founder and senior partner in the Swiss architecture firm Herzog & de Meuron along with Pierre de Meuron (b.1950). Herzog & de Meuron were founded in 1978 and have been awarded several prizes including the prestigious Pritzker Prize in 2001 as well as the RIBA Royal Gold Medal and Praemium Imperiale. Among their many projects are Goetz Collection in Munich (1992), the conversion of the Bankside Power Station in London to the new home of Tate Modern (2000 + 2016), M. H. de Young Memorial Museum in San Francisco (2005), Beijing National Stadium (2008), Serpentine Gallery Pavilion in London (2012), Pérez Art Museum in Miami (2013) and Elbe Philharmonic Hall in Hamburg (2016). In 2006, The New York Times Magazine called them “one of the most admired architecture firms in the world.”

Tatiana Bilbao and Jacques Herzog met at Herzog & de Meuron’s studio in Basel, Switzerland in May 2019. 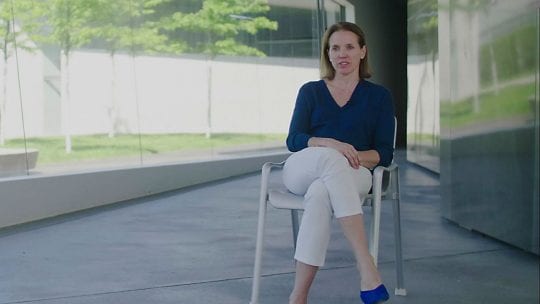 “For me, it should be a word that’s part of what you do in life, not only as an architect.”