24 meters above sea level, with a view of Copenhagen’s harbour, sits a bright red playground atop a car park – a building that transforms our understanding of public space. JAJA Architects guide you through the Swiss army knife of parking facilities.
Read more …

24 meters above sea level, with a view of Copenhagen’s harbour, sits a bright red playground atop a car park – a building that transforms our understanding of public space. JAJA Architects guide you through the Swiss army knife of parking facilities.

The task was to make a facade and a rooftop design that integrated the new central parking facility into Nordhavn, Copenhagen’s youngest residential area, a neighbourhood composed mainly of luxurious residential buildings. Young architects JAJA solved the problem by building a house that “doesn’t just take space, it gives space too,” says co-funder Kathrin Susanna Gimmel. The result: a parking house with an embellished façade and a rooftop activity garden open to the public 24/7. Commissioned by the city of Copenhagen, the building with its iconic red rooftop offers a view over the Copenhagen harbour that most people would pay a fortune for. “The red is borderline communist,” says co-founder Jan Yoshiyuki Tanaka. “It wasn’t intentional, but when you think about it, it’s quite brave of the city to create this kind of space for people.”

Kathrin Susanna Gimmel (b. 1982) and Jan Yoshiyuki Tanaka (b. 1980) co-founded Copenhagen based JAJA Architects, a young international firm who completed Park’n’Play in 2016, with Jakob Steen Christensen (b. 1981). In 2015 JAJA Architects won the competition to design the master plan for Hovinbyen in Oslo, Norway, which will become one of the largest urban transformation projects in northern Europe. In 2016 JAJA won the competition to build a church in Copenhagen, Denmark. When completed in 2019, it will be the first new church in Copenhagen for the last three decades. Find out more about JAJA Architects and their projects here: www.ja-ja.dk 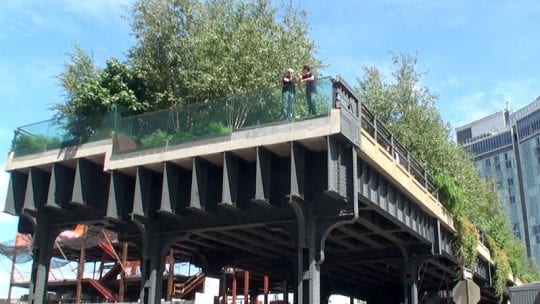