Meet the award winning French architect Jean Nouvel, in this interview about his relationship to the Arab world. The architect is supposed to listen, Nouvel states, instead of imposing his own values and sensitivities on another place. Read more …

In the Arab world there is a battle about identity and modernity going on. Because the development is so fast, you get a lot of misplaced architecture, without local color or identity, Jean Nouvel explains. For him it is important that the architecture reflects Arab identity and religion. Arab architecture is often connected to Islamic architecture, which has a special relationship with geometry, abstractions, decorations, light and water.

Jean Nouvel is known for his contextual approach to architecture, opposing the standard or pre-fabricated buildings being placed all around the world: “My job is to try and understand where the architecture will be situated, how it will be rooted, and what sense it will make where it is.” To Jean Nouvel it is important that the same building could not be located in another place. A building takes part in history, Jean Nouvel explains: “A building always has links, roots. I’m a contextual architect, but for me the context isn’t only the site. It’s above all a wider historical context – a cultural context.” Nouvel also talks about how he believes architecture builds bridges between societies.

Jean Nouvel (b.1945) studied at the École des Beaux-Arts in Paris and was a founding member of Mars 1976 and Syndicat de l’Architecture. He has obtained a number of prestigious distinctions over the course of his career, including the Aga Khan Award for Architecture, awarded for the Institut du Monde Arabe which Nouvel talks about in the beginnig of this interview. In 2008 Nouvel was awarded the Pritzker Prize, architecture’s highest honor. A number of museums and architectural centers have presented retrospectives of his work.

Jean Nouvel was interviewed at his studio in Paris by Marc-Christoph Wagner, January 2014. 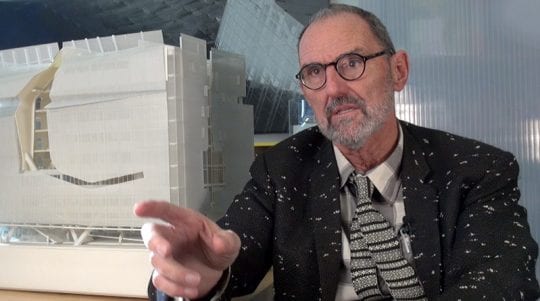 Thom Mayne
Producing Something Off