“The problem of being Superman was that everybody else was so slow.” Enjoy this video of Pulitzer Prize winning novelist Jeffrey Eugenides reading a hilarious section from his novel ’The Marriage Plot’. Read more …

‘The Marriage Plot’ describes a year in the lives of three college seniors at Brown University in the early 80s – Madeleine, Mitchell and Leonard. In the colourful part that Eugenides reads to the audience, we follow Leonard who suffers from manic depression and is having a self-willed manic episode: “Thrusting his hands into the pockets of his jeans, Leonard rocked back and forth on his heels. And that was all it took. In further confirmation of his brilliant move, no sooner did his energy sag than he felt it being replenished, as though tiny valves in his arteries were spritzing out the elixir of life.”

Jeffrey Kent Eugenides (b. 1960) is an American novelist and short story writer, widely known for novels such as ‘The Virgin Suicides’ (1993), ‘Middlesex’ (2001) and ‘The Marriage Plot’ (2011). He received the Pulitzer Price for Fiction in 2003 for ‘Middlesex’ and ‘The Virgin Suicides’ was made into a motion picture directed by Sofia Coppola in 1999. Eugenides lived in Berlin for several years and now resides in Princeton, New Jersey where he is a professor at Princeton University’s Program in Creative Writing.

Jeffrey Eugenides read from his novel ’The Marriage Plot’ at the Louisiana Literature Festival in 2012. 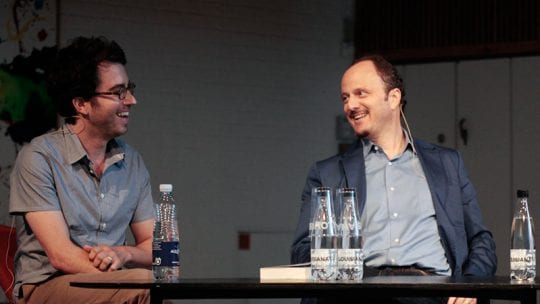