“To me, fiction is a chance to actually have the experience of being someone else from the inside.”

In this extensive video, American Pulitzer Prize-winner Jennifer Egan takes us through her career as a writer and explains why she considers fiction an invaluable document of our time: “By creating a kind of artefact of the dream-life of our culture, I am preserving it for those who want to understand it from a later point.” Read more …

“It was really the solitude that I experienced on that trip that made me understand how crucial writing was for me.” It was during her gap year – travelling around Europe – that Egan realised she wanted to become a writer. She didn’t receive instant success, which she is grateful for: “That sort of immediate notoriety and stardom can make it very hard to work in one’s own private way, which is what writing has to be.” Her motivation, Egan continues, is “a tremendous joy in this transcendent process of engaging with another world that has nothing to do with the one I live in.” In connection to this, Egan talks about the enlightening feeling of entering another consciousness and explains how she prefers to write from a male point of view, because it makes it easier to separate the character from herself: “To me, fiction is a chance to actually have the experience of being someone else from the inside.”

Egan describes fiction as “a sort of dream-life of the culture,” and she feels that it serves as an essential record of our time, because it contains all the subjective elements that are not in history books. Due to what she considers a prevalent “inability to look beyond one’s immediate desires and the wish to have them satisfied,” Egan believes that what she contributes with is to keep people reading fiction: “I actually believe that it makes us better human beings. It awakens the qualities in us that are essential for us to think collectively, which is what we must do.” Finally, when speaking of her interest in investigating the American psyche, Egan argues that violence continues to be a part of it: “We really are a people and a country that is born of violence. We came to re-invent ourselves, but in so doing – and as a means of doing that – we slaughtered untold millions of people. And that kind of thuggish approach to power, that sense of power really meaning ‘you do what I want, or I’m going to kill you’ is the kind of power that Donald Trump emanates…”

Jennifer Egan (b.1962) is an American writer and journalist. Egan had her international breakthrough in 2010 with the novel ‘A Visit from the Goon Squad’, which won a Pulitzer Prize, the Los Angeles Times Book Prize and a National Book Award. Other novels include her debut ‘The Invisible Circus’ (1995), ‘Look at Me’ (2001), and ‘Manhattan Beach’ (2017), which won the 2018 Carnegie Medal for literary excellence and was selected as the One Book, One New York City novel to read. Egan is also the author of the short story collection ‘Emerald City’ (1993/1996) and the short story ‘Black Box’, which was released on The New Yorker’s Twitter account. In 2018 she became President of PEN America.

Jennifer Egan was interviewed by Kasper Bech Dyg at the Louisiana Museum of Modern Art, Denmark in June 2019. 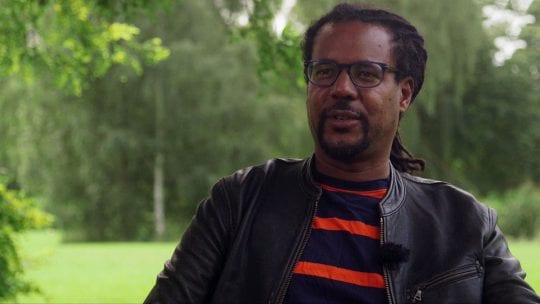 “I have to know the destination before I set out.”

Colson Whitehead
I Have to Know the Destination