“I’m interested in the directness you get from using the voice when expressing words. The microphone brings it together.” Meet the young Norwegian musician, poet and novelist, Jenny Hval, as she experiments at the intersection of writing and music. Read more …

“The microphone is what brings it together for me.” An interview with Norwegian singer, composer, lyricist and writer Jenny Hval (b.1980) about the magical power of synthesizers, her childhood marching band experiences, playing with the meaning of words by turning them into sounds – and about being a microphone nerd.

“I wouldn’t really call myself a writer. I’m more like a failed writer, because I’m too interested in music.” Jenny Hval has in recent years made a name for herself as a writer, journalist, recording artist and sound artist both in Norway and abroad. Hval has released 4 albums – 2 under the stage name Rockettothesky, and 2 under her name Jenny Hval. She studied creative writing and performance in Melbourne, Australia and has written a couple of novels (‘Perlebryggeriet’ (2009) and ‘Inn I Ansiktet’ (2012)) and published several essays. “When I started writing music, was when I found a voice with my writing. Before that I didn’t really write music seriously. I needed words.” She explains in this interview. Hval describes her interests “at the intersection between writing and music”, the directness of the voice and the physicality of language – how singing unfolds the printed word into new forms and meanings, “the way it changes something that you wrote, the way it challenges something that you thought worked.”

Jenny Hval was interviewed by Nathan Budzinski. Extracts from the concert was recorded at Jazzhouse, Copenhagen in May 2013. 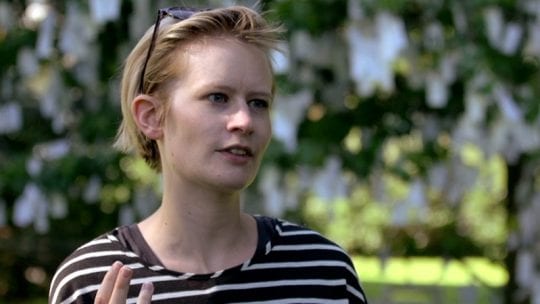