American writers Jenny Offill and Chris Kraus meet in an alluring conversation about the importance of humour in literature and how feminism can be considered scandalous. Read more …

Both ‘Dept. of Speculation’ by Jenny Offill and ‘I Love Dick’ by Chris Kraus centers around a female protagonist sharing thoughts on not only life but also art and philosophy. Offill has named this certain type of person an “art monster”. She describes the art monster as a half jealous and half horrified person that clear the decks in order to devote his or her life to art. Kraus recognizes this description from her own book: “I don’t think anyone could ever sustain art-monsterness.”

‘I Love Dick’ has been described as a ‘scandalous’ novel. However, this is not a description that Kraus approves: “For a married woman to have a crush on a third party… It didn’t seem all that scandalous to me,” she explains. Kraus goes on talking about how the combination of high and low culture can bother some people: “You can talk about Kierkegaard, which she does in the book. And you can use the word ‘cunt’, which she also does in the book.” Offill agrees as the same mixed state appears in her novel. She believes that there’s a certain expectation of how a woman writing about philosophy should be.

When mixing high and low culture in their writing Jenny Offill and Chris Kraus agrees that comedy appears. “Comedy makes you rethink things. Comedy is what goes the deepest,” Kraus says and Offill continues: “Tragedy plus time equals comedy.” In dealing with both the sad and the funny parts of life fiction becomes more like real life, they agree.

As the conversation goes to revolve around feminism Chris Kraus – who personally identifies as a feminist – says: “When I sit down and write a book, I don’t think I’m writing a feminist book per se. I think that everything a person is comes into their work.” Jenny Offill also considers herself a feminist, but even more as an intellectual which – she argues – is much worse in America. When it comes to writing a feminist novel she says: “I like to range all over the place” and continues: “Bring what you know or feel about the world to a book when you write it.”

Chris Kraus (b. 1955) is an American writer and filmmaker. She is widely known for her feminist novel ‘I Love Dick’ (1997), which the English newspaper The Guardian proclaimed “the best novel written about men and women in the 20th century”. The novel follows Chris, who falls in love with her husband’s younger colleague Dick, and along with her husband plunges into an art project, with hundreds of pages of love letters and essays on art written to Dick. When ‘I Love Dick’ was reissued in 2006 it aroused great attention. In 2016 the novel was turned into a TV series by the same name. Among Kraus’ other books are the novels ‘Aliens & Anorexia’ (2000) and ‘Summer of Hate’ (2012) as well as the biography ‘After Kathy Acker’ (2017).

Jenny Offill (b. 1968) is an American novelist and editor. Her novel ‘Dept. of Speculation’ – which was her second novel – was named one of “The 10 Best Books of 2014” by The New York Times Book Review. The books is described as a portrait of a marriage. The lead character – referred to as simply “the wife” – once exchanged love letters with her husband postmarked Dept. of Speculation, their code name for all the uncertainty that inheres in life and in a long relationship. Her work has appeared in the Paris Review and she has also written several children’s books. In 2020 her book ‘Weather’ was shortlisted for the Women’s Prize for Fiction. She has taught in the MFA programs at Brooklyn College, Columbia University and Queens University.

Jenny Offill and Chris Kraus were interviewed by Lotte Folke Kaarsholm in August 2017 in connection to the Louisiana Literature festival at Louisiana Museum of Modern Art, Denmark. 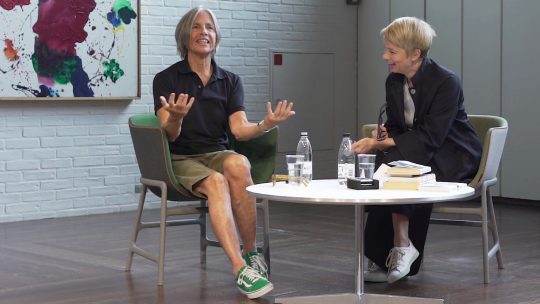