“I’m very interested in performativity, also in terms of architecture performing.” Just usually starts with the location, and in ‘Interpassivities’ this meant a ballet stage, where the floor was stripped of seating and divided into 200 pieces with self-playing instruments and speakers placed underneath: “The audience and the ballet dancers enter together, and there is nothing in the space but sound and people.” The audience is on stage with the dancers and becomes aware of not only the dancers but also each other. Moreover, as the pieces in the floor are moved and stacked one by one – by four workers – the dancers, as well as the audience, have to be mindful of their position in the performance space: “Your own physicality is in the way, constantly being challenged.”

In ‘Interpassivities’ we also meet musician Kim Gordon, donning a tutu and cowboy boots and running a stick along the border fence between the U.S. and Mexico. By this, Gordon is creating a rhythm and the wall is suddenly rendered a musical instrument: “It’s filmed as an instrument this border performs, which is then being danced to by two of the dancers.” The borders, Just adds, is not only in the landscape but also the body.

Jesper Just (b. 1974) is a Danish artist, who works primarily in film. Solo exhibitions include Portland Art Museum in Portland, Palais de Tokyo in Paris, National Museum of Modern and Contemporary Art in Seoul, James Cohan Gallery and Brooklyn Museum of Art in New York, Stedelijk Museum in Amsterdam and Victoria Miro Gallery in London. Just’s work is included in public collections such as Tate Modern in London, Louisiana Museum of Modern Art in Humlebæk and Guggenheim Museum in New York. In 2013 Just participated in the 55th Venice Biennale, Danish Pavilion. Just is the recipient of the prestigious Carnegie Art Award 2008 and the Eckersberg Medal (2014). He lives and works in New York City. For more see: http://www.jesperjust.com/main.html

Jesper Just was interviewed by Kasper Bech Dyg at the Louisiana Museum of Modern Art in Humlebæk, Denmark in March 2017.

Recordings of the performance ‘Interpassivities’ (2017) by Jesper Just was filmed at The Royal Danish Theatre in Copenhagen, Denmark. Courtesy of CORPUS and Jesper Just 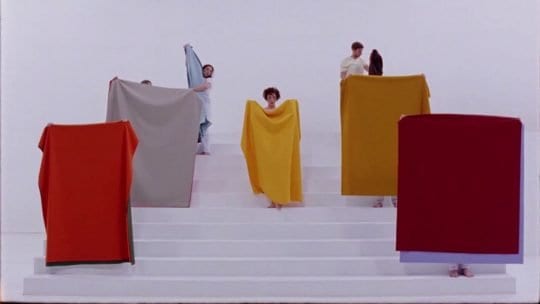 “We’re about to lose a lot of these really important thoughts, which are so important to make a society liveable for all of us.”

Ulla von Brandenburg
How We Live and What We Share