“How do we live in a world where war and violence exist? I thought about that because of who I was, because of who my father was, because of my history and his history.” In this video, the celebrated Swedish novelist and poet Johannes Anyuru talks about growing up as the child of an immigrant, about discovering the beauty of literature, and about writing “books that interfere with society.” Read more …

Anyuru’s father, who had fled Idi Amin’s reign of horror in Uganda, always tried to prepare his son of potentially having to leave Sweden: “He was carrying this experience, and he tried to pass on this wisdom that was a result of his life.” This, Anyuru feels, gave him a sense of rootlessness, which he has also come to see the advantage in: “It may also be beautiful and meaningful not to have a mystical idea about a complete and organic unification with this particular place.” Anyuru’s father also placed great emphasis on education, and his wish was for his son to become a civil engineer. Anyuru began his studies, but it was while studying that “the universe of literature and poetry opened up.”

Following the death of this friend, 23-year-old Anyuru started reading religious books, and felt that the Koran most reflected what was inside him: “And so I became a Muslim ten years ago.” Islam, he explains, gave him the feeling that poetry did the first time he read it, as well as “the promise that there’s something more than just this matter or dust that we also are.” Becoming a Muslim, he continues, has been forced to the surface by “the fact that today Muslims are the gestalt that Europe sees itself as opposed to.” This has made Anyuru want to express what he considers the truth about Islam, and also to investigate the ambivalence that he feels all nations are visited by: “What is actually the meaning of being Swedish or Danish or French?” To be a Muslim in Sweden, Anyuru adds, is “to stand precisely on the dividing line where you’re both Swedish and not Swedish.” He feels that politics are increasingly built on this unrest, “on people’s dreams and nightmares.” When writing about this in his dystopian novel ‘The Rabbit Yard’, however, he also became aware of all that we haven’t lost yet, and all the possibilities we have of discussing politics without violence: “In spite of all the darkness and shadows lots of people think we have to try to live together… Who ask questions.” The biggest kind of violence, the writer concludes, is not asking any questions.

Johannes Anyuru (b. 1979) is a Swedish novelist, poet and playwright. Anyuru made his debut in 2003 with the critically acclaimed poetry collection ‘Only the Gods Are New’ (Det är bara gudarna som är nya) and has since published the poetry collections ‘Omega (2005) and ‘The Cities inside Hall’ (‘Städerna inuti Hall’) (2009). Anyuru is also the author of the novels ‘If I Were to Die Under Other Skies’ (‘Skulle jag dö under andra himlar’) (2010), ‘A Storm Blew in From Paradise’ (‘En storm kom från paradiset’) (2012/2015) about his own father’s life, and ‘The Rabbit Yard’ (‘De kommer att drukna i sina mödras tårar’) (2017). Anyuru is the recipient of several prestigious literary prizes, including Augustpriset (2017).

Johannes Anyuru was interviewed by Lotte Kaarsholm in August 2018 in connection with the Louisiana Literature festival at the Louisiana Museum of Modern Art in Humlebæk, Denmark. 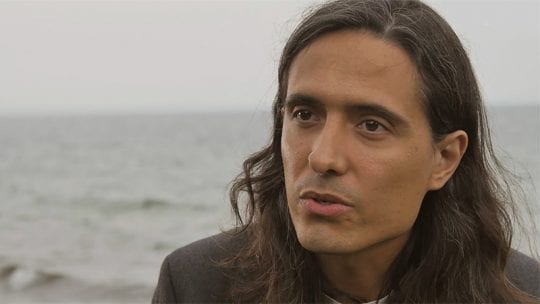 Jonas Hassen Khemiri
Reading Has to Be Dangerous

“It turns into a space that others want to fill perhaps by speaking even more.”