Step inside ‘The Bunker’ in New York, the windowless former apartment of the legendary writer William S. Burroughs, and let yourself be guided around – from Burroughs’ typewriter to his shooting target – by its then current resident, the iconic poet John Giorno (b.1936-d.2019). Read more …

William S. Burroughs lived several places throughout his life. Between 1975-82 the drug addict and writer – famous not least for his automatic writing in books like ‘Naked Lunch’– lived in 222 Bowery, one of New York’s first YMCAs in the 1880s. Performance poet John Giorno has lived at the address since the early 1960s and was delighted to host his friend and colleague, who lived in the basement for seven years and dubbed the windowless space ‘The Bunker’.

“He was a brilliant transcendent writer, but he was more brilliant here,” Giorno recalls and explains how Burroughs was high from 9 in the morning, and then would have vodkas and joints at 5 o’clock in the afternoon. Giorno himself would join him, albeit a bit later in the day: “Doing that for those endless years and years, that was a lesson – not sure what the lesson is though.” Having downed several more bottles of vodka and smoked more joints, Burroughs and his guests would shoot at the target poster, which still has its original bullet holes.

John Giorno has been using ‘The Bunker’ as a guest room for visiting friends and today everything has been restored and kept like it was when Burroughs lived there: the target poster, the typewriter, the gun magazines and the desk all set for someone to sit down and write. We also get to see the ‘Orgone box’ – a box invented by psychoanalyst William Reich, who believed that orgones are vibratory atmospheric atoms of the life-principle, which can be concentrated as a creative substratum. “And if you sat in there you would collect orgone energy of the universal power,” Giorno adds.

Burroughs “always believed there could be chaos and catastrophe, so every house should have a vessel to be able to save enough water to live for four days. So that’s why that was there,” says Giorno about the big water tank on the floor. We also get to see Burroughs’ lamp, which is made from a – still functioning – rifle from the Civil War, as well as his BB gun: “It’s a generational thing of his, coming of age as a young person in the 1920s and 30s, living in the country in St. Louis, and also outside, and being alone and being frail. I don’t think his family were shooters, somehow it entered his life, all of those things.”

John Giorno (b.1936 – d. 2019) is an American poet and one of the most influential figures in contemporary performance poetry with his intensely rhythmic and philosophical poetry. He has published a wide range of poetic works such as the collection ‘You Got to Burn to Shine’, spoken words with William S. Burroughs and Laurie Anderson. In 1962, Giorno was the subject of Andy Warhol’s 6-hour movie ‘Sleep’. Giorno has also created Giorno Poetry Systems, which has published more than 40 spoken LP’s with acclaimed artists such as Allen Ginsberg and Patti Smith.

William S. Burroughs (b. William Seward Burroughs II in 1914 – d. 1997) was an American writer and artist. He was a primary figure of the Beat Generation and a major influence in popular culture and literature, he wrote eighteen novels and novellas, six collections of short stories and four collections of essays, found success with his confessional first novel ‘Junkie’ (1953) but is best known for his highly controversial third novel ‘Naked Lunch’ (1959).  Along with artist, writer and poet Brion Gysin, Burroughs re-invented the literary cut-up technique in works such as ‘The Nova Trilogy’ (1961-1964). Much of Burroughs’ work is semi-autobiographical, primarily drawn from his experiences as a heroin addict. In 1951, he accidentally killed his wife Joan Vollmer with a pistol during a drunken ‘William Tell’ game and was consequently convicted of manslaughter. Through the years, Burroughs also created and exhibited thousands of paintings and other visual artworks, including his celebrated ‘Gunshot Paintings’. He did not, however, exhibit his artwork until 1987, and for last 10 years of his life, he presented his paintings and drawings at museums and galleries worldwide. He died at his home in Kansas after suffering a heart attack in 1997.

John Giorno was interviewed by Christian Lund in New York City in October 2017.

In the video, John Giorno reads from his poem ‘The Death of William Burroughs’ (1997), in which Giorno describes being with Burroughs at his deathbed, being “his vehicle, his consciousness passing through me.”

Photographs used in the video: 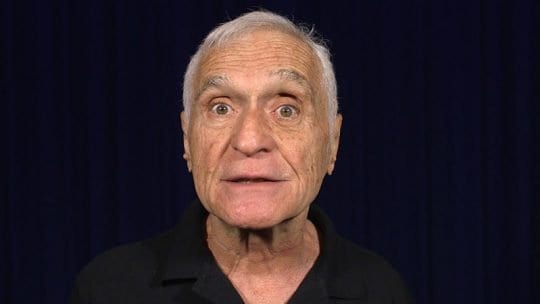