Meet one of the great originators of performance poetry, John Giorno (b.1936 – d.2019), as he reflects on his first meetings with poetry, his great influences, the importance of performing without a book, and where poetry is headed in the future. Read more …

When John Giorno was 14 he experienced what he calls “a blissful feeling” towards poetry, which in life is what you are supposed to follow when you have these positive feelings, he says. Going down the poetic path John Giorno met Andy Warhol and the whole pop art scene in 1962. After being the subject of Andy Warhol’s 6-hour movie “Sleep”, the established modernist poets such as Frank O’Hara and John Ashbery didn’t think much of him.

The energy from the pop art scene was the inspiration for John Giorno when turning his poetry performances into intensely memorized flows that has since become one of his trademarks. ““When the poet has a book in his hands, it’s like a wall between him and the audience”, he explains. Being one of the leading figures in pushing the limits of poetry, John Giorno also explains why the last 50 years has been a golden age of poetry, and how technology is continuing to positively push the boundaries of poetry into new artistic forms.

John Giorno (b.1936 – d. 2019) is an American poet and one of the most influential figures in contemporary performance with his intensely rhythmic and philosophical poetry. He has published a variety of poetic works such as the collection “You got to burn to shine”, spoken words with William S. Burroughs and Laurie Anderson, and also created Giorno Poetry Systems, which has published over 40 spoken word LP’s with other great artists such as Brion Gysin, Allen Ginsberg and Patti Smith.

John Giorno was interviewed by Kasper Bech Dyg in June 2014. 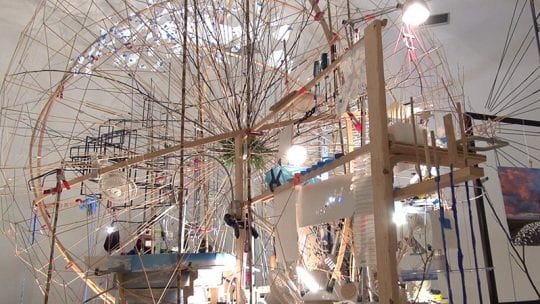 Sarah Sze
The Meaning Between Things