Meet American painter Julie Mehretu who, in her recent series of Metoikos paintings, tries to reflect the state of our contemporary world. Read more …

“A lot of our assumptions will be challenged”, she says, defining the reality of most people as living in between – of “being and not being” at the same time. “I am in a state of alert, a state of alarm.”

Asked about the intensity of colour in the Metoiko series, Mehretu states: “Well, we had Trump. You had to do something.”
Julie Mehretu (b. 1970, Addis Ababa, Ethiopia) lives and works in New York City. She received a B.A. from Kalamazoo College, Michigan, studied at the University Cheikh Anta Diop, Dakar, Senegal, and received a Master’s of Fine Art with honours from The Rhode Island School of Design in 1997.
In exploring palimpsests of history, from geological time to a modern-day phenomenology of the social, Julie Mehretu’s works engage us in a dynamic visual articulation of contemporary experience, a depiction of social behaviour and the psychogeography of space. Mehretu’s work is informed by a multitude of sources, including politics, literature and music. Most recently, her paintings have incorporated photographic images from broadcast media which depict conflict, injustice, and social unrest. Mehretu’s practice in painting, drawing, and printmaking equally assert the role of art to provoke thought and reflection and express the current condition of the individual and society.
She has received many prestigious awards, including the MacArthur Fellowship in 2005 and the U.S. Department of State Medal of Arts Award in 2015 and membership to the American Academy of Arts and Sciences, in 2021. Her work has been exhibited extensively in museums and biennials, including the Carnegie International (2004–05), Sydney Biennial (2006), Solomon R. Guggenheim Museum, New York (2010), dOCUMENTA (13) (2012), Sharjah Biennial (2015), Museu de Arte Contemporânea de Serralves, Porto, Portugal (2017), Kettle’s Yard, University of Cambridge, UK (2019); and the 58th International Art Exhibition, La Biennale di Venezia, (2019).
In November 2019, a career survey opened of Mehretu’s work at the Los Angeles County Museum of Art and afterwards travelled to The Whitney Museum of American Art, New York; The High Museum, Atlanta; and The Walker Museum of Art, Minneapolis.

Julie Mehretu was interviewed by Marc-Christoph Wagner in connection with her exhibition Metoikos (in between paintings) at the gallery Carlier Gebauer in Berlin in September 2021. 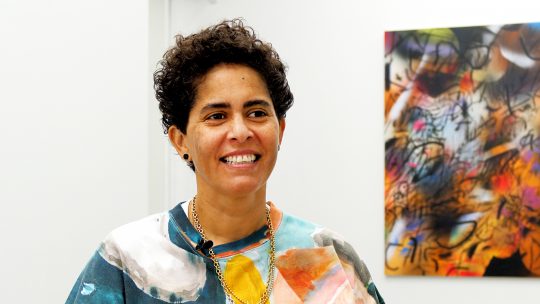 “This painting is one of the most beautiful I can think of."