"Angela Merkel has been one of the most humanitarian-sensed leaders of our time.”

American painter Julie Mehretu gives her resumé over the woman being German Chancellor for 16 years. “She really opened the doors.” Read more …

Mehretu especially reflects upon Angela Merkel’s role during the pivotal refugee crisis in 2015 and onwards. “You have a humanitarian and humanistic responsibility. Merkel was an incredible leader showing incredible courage in doing something that was very unpopular and not done by other leaders in the same way. I think it is going to be a big loss.”

Julie Mehretu, (b. 1970, Addis Ababa, Ethiopia) lives and works in New York City. She received a B.A. from Kalamazoo College, Michigan, studied at the University Cheikh Anta Diop, Dakar Senegal, and received a Master’s of Fine Art with honors from The Rhode Island School of Design in 1997.

In exploring palimpsests of history, from geological time to a modern-day phenomenology of the social, Julie Mehretu’s works engage us in a dynamic visual articulation of contemporary experience, a depiction of social behavior, and the psychogeography of space.

Mehretu’s s work is informed by a multitude of sources including politics, literature, and music. Most recently her paintings have incorporated photographic images from broadcast media that depict conflict, injustice, and social unrest. Mehretu’s s practice in painting, drawing, and printmaking equally asserts the role of art to provoke thought and reflection and express the contemporary condition of the individual and society.

She has received many prestigious awards including the MacArthur Fellowship in 2005, and the U.S. Department of State Medal of Arts Award in 2015 and membership to the American Academy of Arts and Sciences, 2021. Her work has been exhibited extensively in museums and biennials including the Carnegie International (2004–05), Sydney Biennial (2006), Solomon R. Guggenheim Museum, New York (2010), dOCUMENTA (13) (2012), Sharjah Biennial (2015), Museu de Arte Contemporânea de Serralves, Porto, Portugal (2017), Kettle’s Yard, University of Cambridge, UK (2019); and the 58th International Art Exhibition, La Biennale di Venezia, (2019).

In November 2019 a career survey opened of Mehretu’s work at the Los Angeles County Museum of Art and afterward travelled to The Whitney Museum of American Art, New York; The High Museum, Atlanta, and The Walker Museum of Art, Minneapolis.

Julie Mehretu was interviewed by Marc-Christoph Wagner in connection with her exhibition Metoikos (in between paintings) at gallery Carlier Gebauer in Berlin in September 2021. 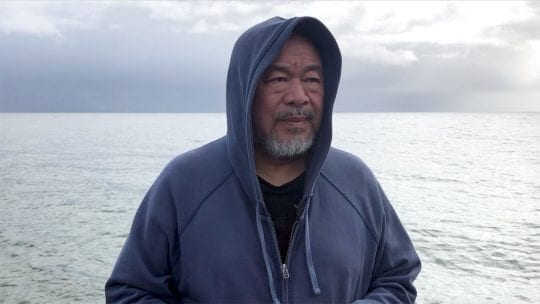 “I think we are facing a true revolution.”

Ai Weiwei
Our Judgement is Crippled

"He is their rebellion, their battle cry, their most important message to the world.”

Erkan Özgen
When Language is Not Enough