Kaarina Kaikkonen
A Father, a Mother and a Child

“If I’m honest with myself, this artwork can speak to other people as well.”

“In a way, all of my artwork is kind of self-portraits.” Meet one of the leading contemporary Finnish artists, Kaarina Kaikkonen, who tells poignant, personal stories – such as the tragic loss of her father – through her sculptures and gigantic installations made from recycled materials. Read more …

Having lost her father to a heart attack at a very young age, Kaikkonen initially wanted to help people, and “to make the world better.” She thus studied physics and medicine, believing that art was a selfish road to take, and it wasn’t until she discovered how therapeutic it was for her to draw her father, that the door to art opened for her: “Then I changed my life into art.” Through her art, and other people’s interpretation of her art, Kaikkonen explores the difficulties of being a human being, with all the different feelings that entail. For the Finnish artist, it’s all about dialogue, how we see each other and how we perceive the world depending on our experiences and feelings. Moreover, though it was initially difficult for her to accept her role as an artist, she has come to realise it’s impact: “Every piece of art can change the world a little bit, and this helps me to accept myself as an artist.”

Kaikkonen also talks about how all the symbols in her artwork stem from her own life. An example of this is her use of clothes similar to her father’s – such as a boat made from used men’s shirts – which has been a way to keep him close. When her work echoes her mother, whom she lost later in life, the expression is more colourful, with high-heeled shoes turned into flowers or insects, or other “female material”, which is transformed into something else – like the passing of her mother. In continuation of this, Kaikkonen likes old or recycled things, and another of her pieces was made from toilet paper, because she felt that this material, like her self, is fragile, passing and “made for going away.”

Kaarina Kaikkonen (b. 1952) is a Finnish artist, who works with sculpture and installations. Her works are often made up of recycled materials such as used shirts, skis or dance shoes, which she assembles into gigantic installations that cast a spell over viewers with an immediate and overwhelming beauty. Kaikkonen has held solo exhibitions at prominent museums worldwide, such as KUNSTEN Museum of Modern Art in Aalborg, Kiasma in Helsinki, MAXXI Museo Nazionale Delle Arti in Rome, the Hermitage Museum in St. Petersburg and The Kennedy Center in Washington. Among the awards she has received are the Finland Art Reward (2001), The Public Prize, Den Haag Sculptuur (2004), Honorable Mention in Cairo 11th Biennale (2009) and The Golden Chimera, 1. Biennale International d’Arte di Arezzo (2013). For more see: www.kaarinakaikkonen.fi

Kaarina Kaikkonen was interviewed by Stinna Toft Hald at her studio in Helsinki in March 2018 in connection with her exhibition ‘You Remain in Me’ at KUNSTEN Museum of Modern Art in Aalborg, Denmark.

Cover photo: From Kaarina Kaikkonen’s exhibition ‘You Remain in Me’ at KUNSTEN in Aalborg, Denmark 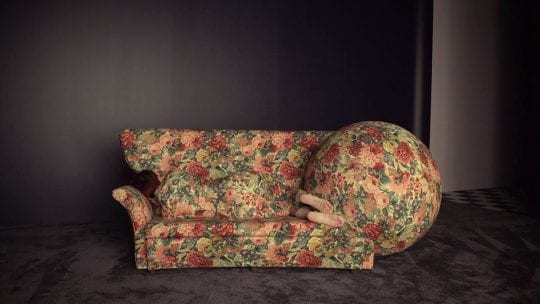