Ever wondered what it would be like to feel touched by a room? That special wow-feeling is what designer Karim Rashid strives to achieve when he creates his colorful shapes and spaces, making you embrace the time you live in. Read more …

”Space is a different animal than an object”. An interview with designer Karim Rashid about his move from product design into interior design – shaping spaces rather than just objects.

”We should be embracing the time we live in.” Karim Rashid wants to touch humanity and give them different emotional experiences. He wants people to stop living in the past, and live in the present in stead. He belives that people are concervative because they are afraid. His main aim with his design is to make people feel alive, happy and aware of their existance. He wants people to leave thinking about the way they could be living: ”I’ve gotta make changes in my life.”

Industrial designer Karim Rashid was born in 1960 in Egypt and raised in Canada. He now resides in New York. He has won more than 40 awards, including the George Nelson Award in 1999, the Canadian Designer of the Year award in 2001, and the Red Dot Design Award in 2012. His work is part of 20 permanent collections and has been exhibited in galleries world wide, including MoMA and Centre Pompidou. 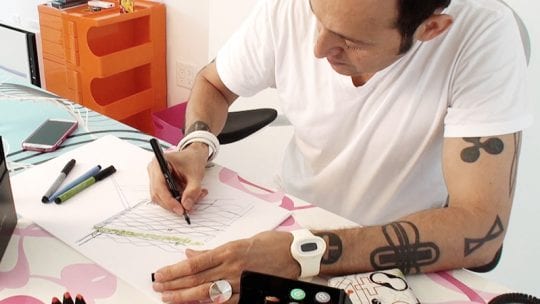