Meet German artist Katharina Grosse in this very personal conversation in which she reflects on her upbringing, the importance of traveling, different elements meeting each other, and the idea of given back to society. Read more …

Katharina Grosse uses painting, sculpture, and architecture in her artworks, which tend to be large-scale, site-related installations. Her international reputation has grown steadily over the past years. Born in 1961 in Freiburg, Germany, she attended art academies in Düsseldorf and Münster.

After her education, she taught at the Art Academy Berlin-Weissensee for more than a decade between 2000 and 2010. From 2010 to 2018, Grosse was a painting professor at the Düsseldorf Art Academy. She currently lives and works in Berlin – a city, that she has known since childhood, but used to have split feelings about: “I did not really love the city. Today my staying here has a lot to do with the people that I meet from the different areas – writing, theatre, music. So when you have an invitation at night and you meet people, you never know what’s coming out of it, who are you going to be with, what’s the night going to do with you and your thinking.”

Eventually, Grosse built her own studio in the center of the city that incorporates all necessary features for her large scale formats. “There is only skylight, the paintings are super sharp, you can see everything.” At the same time traveling and working abroad are still central elements in Grosse’s life and work: “I like to get to know a new place. I like to be a stranger to a place. And to come as a person that is not part of a place, a space, a location – to come as somebody who doesn’t know it. So being abroad became a very important part of my studio-life.”

Grosse continues reflecting upon central elements in her work: color, places, structures, the role of art, social responsibility, and the importance of having grown up in Germany in the 1960s and 1970s with its dark shadow of history. Also for her artistic development shadows played a vital role: “When I woke up in the morning, I would see shadows in the room and I would imagine a paintbrush to paint them away. I was very convinced of things even though they couldn’t work. And I was very convincing even though my results did not match my conviction. Sometimes my surroundings wouldn’t agree and I was surprised. I was truly imagining something that maybe wasn’t visible. I was always very confident in terms of art. Without reason really. I mean, I wasn’t like Picasso drawing pigeons.”

Today, Katharina Grosse is working and exhibiting around the globe and has won numerous recognitions for her work. “I don’t know whether or not I can describe myself as outgoing. I like to be by myself, I have no problem being by myself for days and days and days. But I do believe that I make the work for somebody else. I don’t think about public as such. But I absolutely want it to be seen. And I think it has to be loud and noisy.”

Katharina Grosse was interviewed by Marc-Christoph Wagner at her studio in Berlin in August 2020. 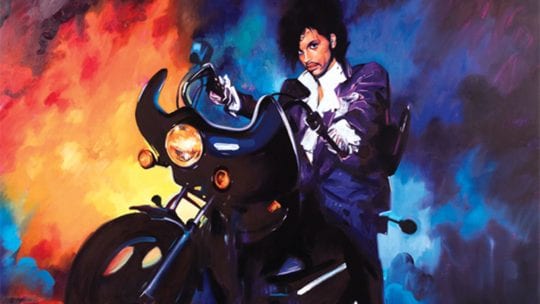