Come take a walk in the forest with Scottish artist Katie Paterson, who tells us about her artwork Future Library. And meets world famous writer Margaret Atwood, who will write this future library’s first story, not to be published for 100 years. Read more …

Future Library is an artwork unfolding over a hundred years. Recently, artist Katie Paterson (b. 1981) has planted trees in a forest nearby Oslo, that in a hundred years time will be made into an anthology of books. Moreover for each year over the next century one author will be invited to write a story, that will not be read till 2114. “Year by year the manuscripts will be stored in a specially designed room in the new Oslo library and the only thing you will be able to see is the name of the author and the title of the text and the year the work was written. Nobody will be able to read the work beforehand”, says Katie Paterson.

“We will do everything to ensure that the books will be printed. But there are so many ifs and unknowns: Will a fire have wiped out the forest? A storm? Will Norway still be a country? There are so many things, we cannot predict. Or as Margaret Atwood said: Will the human species still exist?”

Concerning the texts, Katie Paterson says: “We are putting no restrictions at all to what will be written – from one word to unlimited words in any language. It’s complete freedom to the authors, other than that they have one year to write the text, before they have to submit it in and they are not able to publish it anywhere.”

When Katie Paterson presented the idea of future library to world famous writer Margaret Atwood (b. 1939) and asked her to write the first story, the Canadian author didn’t hesitate to say yes. She was fascinated by the idea: “I think, it takes us back to our childhood, when we used to bury things in secret locations and hope for somebody to come and dig them up. Or to when we put messages into bottles and threw them into the ocean.”

Katie Paterson was born in Glasgow in 1981 and educated at Edinburgh College of Art from 2000-2004 and at the Slade School of Art from 2005-7. Recent artworks include Earth–Moon–Earth (2007) which involved the transmission of Beethoven’s Moonlight Sonata to the moon and back; Vatnajökull (2007-8) – a live phone line to an Icelandic glacier; and All the Dead Stars (2009), a large map documenting the locations of the 27.000 dead stars known to humanity.

Katie Paterson and Margaret Atwood were interviewed by Marc-Christoph Wagner. 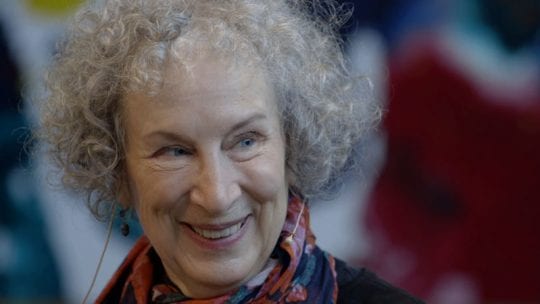