This video presents a poet, who believes in uncreative writing and reads traffic reports to Barack Obama in the White House, calling it poetry. Meet Kenneth Goldsmith, who claims that “copyright doesn’t exist.” Read more …

Kenneth Goldsmith is anything but an ordinary poet. His poems are copied text from other sources such as traffic reports, a commentary track from a baseball game and an entire transcribed New York Times newspaper – all revolving around the same question: What can poetry possibly be?

The poetry of Goldsmith is vernacular, but also unreadable, such as his book ‘Day’ with its 900-page transcription of a newspaper. His work is about the ideas and discussions that it generates, rather than about reading the actual work.

“I am in love with creativity, I just don’t like what it has become”, says Goldsmith. This is why he is throwing plagiarism, boredom and uncreative writing back at creativity, with the hope of reviving it: “I am obliged as a poet to be as experimental as possible, because I have nothing to gain by playing it safe.” This uncreative approach to poetry has led Goldsmith as far as to the White House, where he read plagiarized traffic reports to the President of the United States, Barack Obama, who was clearly quite entertained.

Touching on the metaphysical and philosophical problems of poetry, Goldsmith concludes: “One of the great tragedies of poets is that they assume they are being read, and they are not. So why not assume there will be no readership and give great concepts to think about instead?”

Kenneth Goldsmith (b. 1961) is an American conceptual poet. He has published numerous books such as ‘Day’, ‘Seven American Deaths and Disasters’ and a New York Trilogy consisting of ‘Weather’ (2005), ‘Traffic’ (2007) and ‘Sports’ (2008). He also teaches uncreative writing at the University of Pennsylvania, where one of his classes in 2015 is the much debated ‘Wasting time on the internet’. Since 2013, Goldsmith has been a MoMA poet laureate. 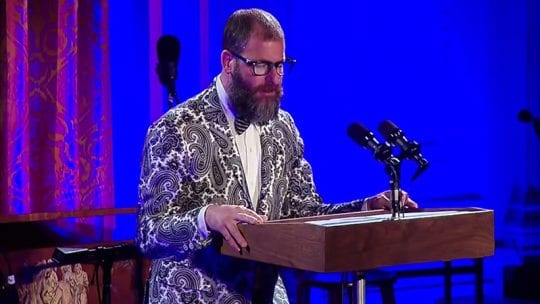