When American poet, Kenneth Goldsmith, was invited to the White House to do a poetry reading and to have a poetry workshop with the First Lady, Michelle Obama, the level of engagement positively surprised him: “I’m talking about illegal stuff here at the White House, and everybody seems to think it’s great.”

Goldsmith’s poetry is often based on plagiarism. Taking other people’s words, placing them into ideas of context and claiming them as his own poetry. This is also why he chose to entertain the White House with the reading of traffic reports – something that truly amused the audience and not least President Barack Obama: “The weirdest, most avant-garde, most appropriated text was the one that got the biggest response because it was in the language that everybody could understand – it was vernacular.”

This seems to prove Goldsmith’s point that though some people say, that his poetry is radical populism, what really makes it radical, is that it’s democratic and thus written in a language that everyone can relate to.

Kenneth Goldsmith (b. 1961) is an American conceptual poet. He has published numerous books such as ‘Day’, ‘Seven American Deaths and Disasters’ and a New York Trilogy consisting of ‘Weather’ (2005), ‘Traffic’ (2007) and ‘Sports’ (2008). He also teaches uncreative writing at the University of Pennsylvania, where one of his classes in 2015 is the much debated ‘Wasting time on the internet’. Since 2013, Goldsmith has been a MoMA poet laureate. 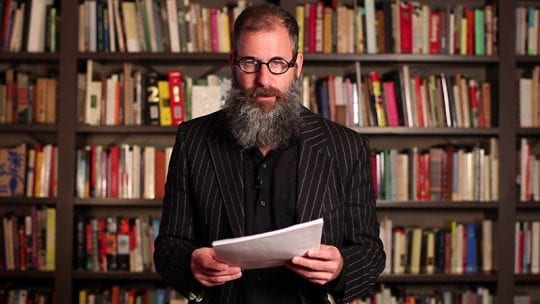