“It is a difficult time.”

Meet Russian writer and activist Kira Yarmysh in this thoughtful interview about the tense political situation in her home country. Read more …

“Well, in modern Russia many people use patriotism as a political tool. Putin also tries to frame patriotism as something very different from what it really is. Real patriotism is wanting the best for your country, not wanting to get rich. That’s something that neither Putin nor his entourage nor any official at any level can understand.”

Yarmysh, who works as press secretary to the imprisoned Russian opposition leader Alexei Navalny, recently published the internationally acclaimed novel The Incredible Events in Women’s Cell Number Three. In the meantime, she had to leave her country due to political persecution by the Russian authorities.

“I believe, Russia can be prosperous and beautiful. That’s why I have this urge to make some wrong things right. I just love that land because it’s my land. But the state and those who rule Russia at the moment, they aren’t my homeland, they aren’t my country.”

In the centre of Yarmysh’s novel is a young woman, Anya, who, much like the author’s own story, is arrested at a Moscow anti-corruption rally and sentenced to a 10-day stretch under false pretences at a special detention centre. Her cellmates are five other ordinary women, all arrested on petty charges. The women come from all strata of Russian society and get to know each other as they talk over plastic cups of lukewarm tea about politics, feminism, their families, their sexuality, their loves, and how to make the most of prison life.

“There is a whole generation that has never seen a leader except Putin because he has been there for 23 years. By staying in power, Putin is stealing their future. The Kremlin is doing everything to silence people, to make them afraid, to make them shut up”, says Yarmysh.

The Incredible Events in Women’s Cell Number Three is a brilliant exploration of what it means to be marginalised both as an independent woman and in an increasingly intolerant Russia in particular, and a powerful prison story that renews a grand Russian tradition. Despite the bleak situation in her home country and being forced into exile, Yarmysh stays optimistic about the future:

“I think that’s a law of life. The new and the young vanquish the old and obsolete. So historically, Putin has no chance. He will be swept away by the people who are yet to come.”

“Yes, it is a difficult time, and we have to overcome it. But I believe that all those hopes and aspirations of the ‘90s and early ‘00s are still there, and they are the same. It’s just that the way to freedom turned out to be longer than we wanted. I am certain that if all people who are unhappy with this regime said so and took to the streets, the regime would fall within a day.”

“I think it’s a hard challenge creating a democracy in a country where people did not inherit it in their blood. But frankly, I think that if other countries made it, Russia can make it too. Take the Baltics. They were part of the USSR. But they are beautiful European democracies by the best European standards. I am certain that if you give people a choice, no Russians will ever choose war, hunger or poverty. Everyone will choose a normal prosperous future where they have opportunities, where they can realise their potential.”

Kira Yarmysh was born in 1989 and has been Russian opposition leader Alexei Navalny’s press secretary since 2014. She graduated from Moscow State Institute of International Relations. In connection with her work for Navalny, she has been arrested several times and spent a month in prison. The Incredible Events in Women’s Cell Number Three is her debut novel.

Kira Yarmysh was interviewed by Marie Tetzlaff at the Louisiana Museum of Modern Art in Denmark in September 2022. 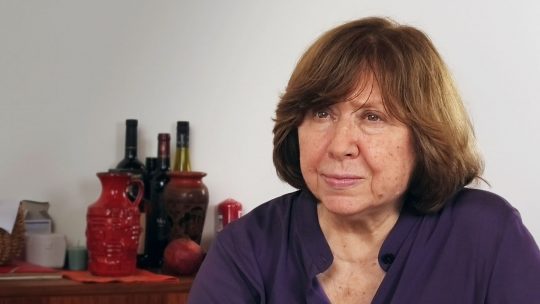 “Lukashenko is a guardian of the Soviet era. He tried to stop the time.”