Liao Yiwu
Shout Out the Horror

Hear the moving and dramatic story of Chinese author Liao Yiwu – how he wrote the most famous poem describing the horror of the Tiananmen Square protests of 1989, his brutal imprisonment and how his accounts made him an enemy of China. Read more …

“I often say that I might have been another person hadn’t it been for the Tiananmen massacre. Such as an anarchist forever living life as homeless.” When Yiwu grew up, a lot of Western things came to China, and he developed a strong fascination for Allen Ginsberg and the Beat Generation. This movement, he felt, represented his values, and he also acknowledges that if he had had the opportunity, he too would have been doing drugs: “I was an anarchist. Against politics, mass movements and held a self-hatred.”

“My attitude towards life is to value poetry and literature.” Yiwu states that he does not take a great interest in politics. When a Canadian drifter came to stay at his place, he brought a foreign radio, which provided Yiwu with eye-opening news that would otherwise have been banned. His controversial poem ‘Massacre’ was in fact written before the actual massacre happened. When the massacre occurred, Yiwu recorded the horrifying sounds, made cassette tapes of himself performing the poem and added the before mentioned sounds from the massacre: “I wanted to describe the horror, but also shout out the horror.”

The poem came to be the most famous about the Tiananmen Square protests, and after having recited and recorded it onto audiotapes – which were passed on to people in more than ten provinces – Yiwu suddenly found himself being put under surveillance – and was soon after sentenced to prison. There he underwent the most horrifying methods of torture: “I was treated even worse than a prostitute. Would you still believe you were a poet? No, you were totally stripped.” The book ‘For a Song and a Hundred Songs: A Poet’s Journey Through a Chinese Prison’ (2013) contains the author’s memoirs from his years in prison.

Liao Yiwu (b. 1958) is a Chinese author, reporter musician and poet. Yiwu is an avid critic of the Chinese regime, and between 1990 and 1994 he was imprisoned for writing and performing the poem ‘Massacre’, which was a memorial to the thousands of people killed during the Tiananmen Square protests of 1989. In prison he was subjected to extreme torture and suffered several mental breakdowns, but in spite of this, he also managed to interview other prisoners about their lives, which later resulted in the book ‘Testimonials’ (2002). At his release, he experienced frequent harassment from the authorities and was placed on the Chinese government’s blacklist. He lived for a period of time as a homeless street musician, collecting stories – several of Yiwu’s books are in fact collections of interviews with people from the lower rungs of Chinese society, such as his multi-volume ‘Interviews with People from the Bottom Rung of Society’ (2001). Yiwu – whose books are banned in China (excluding Taiwan and Hong Kong) – has received prestigious awards such as a Human Rights Watch Helmann-Hammet Grant (2003), a Freedom to Write Award from the Independent Chinese PEN Center (2007), the German Geschwister-Scholl-Preis (2011) and the Peace Prize of the German Book Trade (2012). He has resided in Germany since 2011.

Liao Yiwu was interviewed by Christian Lund at the Louisiana Museum of Modern Art, Denmark in July 2015. Clips of Liao Yiwu performing the poem ‘Massacre’ in Elsinore, Denmark are also featured in the video. 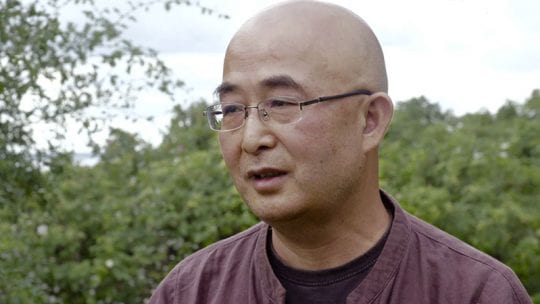 Liao Yiwu
What the Monk Taught Me