What happened when one of China’s foremost painters went on an expedition to Uummannaq in Greenland? Liu Xiaodong here describes his moving experience of portraying children from the northernmost orphanage in the world: “Their survival skills are so strong.” Read more …

Xiaodong is internationally recognized for his masterly ability to depict the human dimension to global issues through stories from contemporary life, and when he travels abroad, he always tries to visit a couple of families: “The family illustrates a whole region.” Going to Uummannaq in 2017, he became aware of how they depend on nature for living and thus have a strong tradition for hunting: “But today, with our protection of nature, we don’t allow them to do this. As a result, they are quite depressed. They are irresolute. The heroic life that is in their hearts does not exist anymore…” This sense of pain, he continues, is particularly evident in the children, who in their helplessness are “the symbol of the relationship between the universe and humanity.” In the orphanage, the children appeared happy, “but in their hearts, there is something that you don’t know about. Sometimes that will suddenly break out in the open… That leads some kids to commit suicide.” At the same time, Xiaodong was also touched by their toughness and their survival skills: “They are not like the kids who grow up in the city, who can only play computer. No. Their work skills are very strong. I really love them.”

”A good portrait grasps the life of people’s hearts.” Xiaodong prefers being face to face with the person he paints because he feels it makes him paint better, but also because “when you sit in front of someone you paint, anything foreign disappears.” Instead, the similarities become clear: “A good portrait actually makes you feel the portrayed person is related to you… It’s like the portrait makes you feel that the person’s soul has some resemblance with you.”

Liu Xiaodong (b. 1963) is considered one of China’s leading artists. In his often large-scale paintings, Xiaodong depicts the lives, narratives and landscapes of modern humanity, finding his subjects in places all over the world, where he settles down and spends time with those he wants to portray. He lives and works in Beijing but has undertaken projects in e.g. Tibet, Japan, Italy, the UK, Cuba and Greenland. Xiaodong’s work has been the subject of numerous solo exhibitions worldwide including Palazzo Strozzi in Florence, Kunsthalle Düsseldorf, Seattle Art Museum, and Ullens Center for Contemporary Art in Beijing. His work has also been included in group exhibitions including the Gwanju Biennale (2014), the Shanghai Biennale (2000 and 2010), the 15th Biennale of Sydney and the Venice Biennale (2013 and 1997).

Liu Xiaodong was interviewed by Marc-Christoph Wagner at Lisson Gallery in London in January 2019 in connection with the exhibition ‘Liu Xiaodong: Weight of Insomnia’. The interview is made in connection with the exhibition ‘Expedition to Uummannaq, Greenland’ (21.3.2019 – 10.6.2019) at the Louisiana Museum of Modern Art in Humlebæk, Denmark: https://www.louisiana.dk/en/exhibition/liu-xiaodong

Cover photo: Cropped version of ‘Nuka and his Brothers and Sisters’ (2017) by Liu Xiaodong 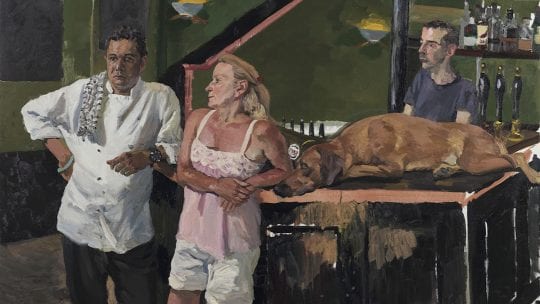 “We humans are very strange animals. We always dream about going to far-away places.”