“We humans are very strange animals. We always dream about going to far-away places.”

“Artists are like small angels, who fly back and forth,” says the pre-eminent Chinese painter Liu Xiaodong, who believes that the open-mindedness of artists can inspire us to broaden our outlook: “Painting is not directly related to changing society but it is close to having an effect.” Read more …

In the mind of an artist, Xiaodong argues, there is no such thing as national boundaries, and because they don’t do much practical work, artists rely on their imagination: “He can look and then paint what he sees and show it to you… We need artists to travel between countries to communicate this innocent view of the world.”

“We humans are very strange animals. We always dream about going to far-away places.” Xiaodong also talks about his urge to visit the remote corners of the world, and the addictive nature of painting: “I will be happy during those days I work and paint. Just like smoking allows you to feel happy for ten minutes.”

Liu Xiaodong (b. 1963) is considered one of China’s leading artists. In his often large-scale paintings, Xiaodong depicts the lives, narratives and landscapes of modern humanity, finding his subjects in places all over the world, where he settles down and spends time with those he wants to portray. He lives and works in Beijing but has undertaken projects in e.g. Tibet, Japan, Italy, the UK, Cuba and Greenland. Xiaodong’s work has been the subject of numerous solo exhibitions worldwide including Palazzo Strozzi in Florence, Kunsthalle Düsseldorf, Seattle Art Museum, and Ullens Center for Contemporary Art in Beijing. His work has also been included in group exhibitions including the Gwanju Biennale (2014), the Shanghai Biennale (2000 and 2010), the 15th Biennale of Sydney and the Venice Biennale (2013 and 1997).

Liu Xiaodong was interviewed by Marc-Christoph Wagner at Lisson Gallery in London in January 2019 in connection with the exhibition ‘Liu Xiaodong: Weight of Insomnia’. The interview is made in connection with the exhibition ‘Expedition to Uummannaq, Greenland’ (21.3.2019 – 10.6.2019) at the Louisiana Museum of Modern Art in Humlebæk, Denmark: https://www.louisiana.dk/en/exhibition/liu-xiaodong 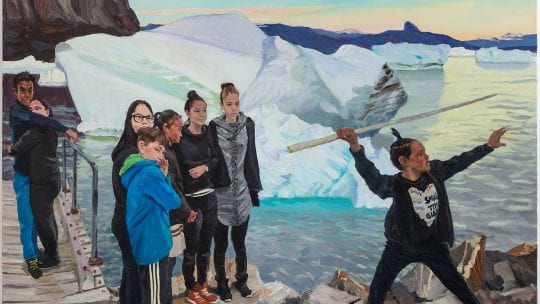