Meet Lydia Davis, one of the most important short story writers in America today. She reads from her prose and talks about her family background, her influences, her struggle to find her literary form and how her stories emerge from her personal life.

“The urge to write goes back to the urge to make anything, just to make it and make it out of language. There is a certain pleasure in taking raw material that is even messy and difficult and shaping it into something, I am not sure whether you get rid of something, but at least you have something made you feel good about.”

Lydia Davis was brought up in an atmosphere of writing: Both of her parents worked with writing and “language was always discussed,” she says, and they encouraged her to write and she read aloud for them. Davis mentions Russell Edson, who is considered a master of short narrative, as a great inspiration, besides Samuel Beckett.

A lot of her stories take their point of departure from her own life, she states, but in order to give it “a complete form” she needs to distance herself from the personal: “Once I shape it properly and give it the right rhythm and language I think if it was more casually written it would cross the line to confession and would be more uncomfortable, it would not be a finished made thing.”

Lydia Davis (b. 1947) is regarded as “the master of form largely of her own invention.” She has written a number of collections of short stories and one novel. When Davis received the Man Booker International Prize in 2013 the chairman of the judges said her “writings fling their lithe arms wide to embrace many a kind. Just how to categorise them? They have been called stories but could equally be miniatures, anecdotes, essays, jokes, parables, fables, texts, aphorisms or even apophthegms, prayers or simply observations.” Davis is also an acclaimed translator of e.g. Proust, Flaubert and Maurice Blanchot. 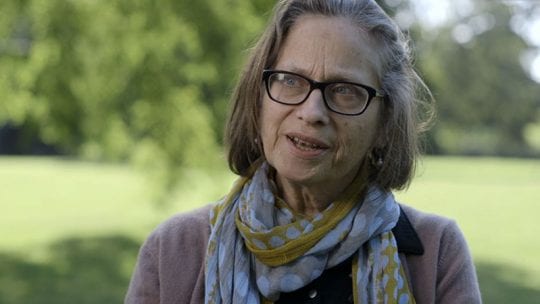 Lydia Davis
All I Get Out of Three Cows