Experience award-winning Canadian writer Margaret Atwood in this humorous and vivid conversation about her works of elaborate ‘speculative fiction’, and how reality and science fiction are in fact inextricably intertwined. Read more …

“It’s a little bit like running very fast, because you’re a split second ahead of reality and reality may not in fact take the turn that you thought that it would – or it may already have taken that turn and you just didn’t know about it.” Atwood operates within the science fiction genre ‘speculative fiction’, which for the larger part deals with things that could potentially happen. She has chosen to leave the tales of “first prize dragons” to others, and has instead made up a new human race, which is devoid of symbolic thinking, has built-in sunblock and turns blue when in mating season.

A dedicated and declared environmentalist, Atwood is very occupied with the future of nature: species extinction, global warming, and “methane burping cows.” Moreover, she sees the rise – and return – of a green branch of Christianity as something which has been long coming: “People are now coming around to a much more holistic view of nature… so it shouldn’t be too surprising that Christianity is now connecting with its roots.”

Margaret Eleanor Atwood (b. 1939) is a Canadian poet, novelist, literary critic, essayist and environmentalist activist. She has been shortlisted for the prestigious Man Booker Prize five times, winning once for ‘The Blind Assassin’ (2000), and was inducted into Canada’s Walk of Fame in 2001. Furthermore, she is a founder of the Writers’ Trust of Canada, a non-profit literary organization that seeks to encourage Canada’s writing community. Among her novels are ‘The Edible Woman’ (1969), ‘The Handmaid’s Tale’ (1985), ‘The Robber Bride’ (1994), ‘The Blind Assassin’ (2000), ‘Oryx and Crake’ (2003), ‘The Year of the Flood’ (2009) and ‘MaddAddam’ (2013) – the last three forming a dystopian trilogy. While she is best known for her work as a novelist, she is also the author of children’s literature and has published several books of poetry inspired by myths and fairy tales. She is also the inventor and developer of the LongPen and associated technologies that facilitate the remote robotic writing of documents.

Margaret Atwood was interviewed by Synne Rifbjerg at the Louisiana Literature festival at Louisiana Museum of Modern Art, Denmark in August 2014. 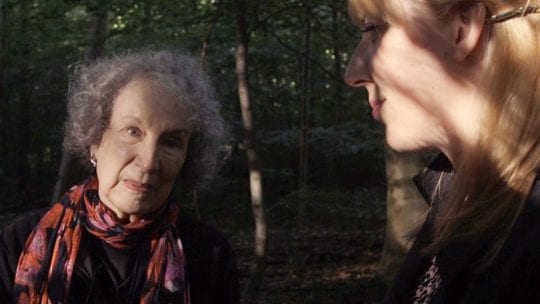